10 Steps to a Giant Pumpkin – by Don Langevin

For many of us, fall means a bounty of pumpkins for pies and jack-o’-lanterns, along with a gathering in of the rest of the autumn harvest. But for thousands of backyard gardeners, fall is the time of reckoning and – for a lucky few – glory. These are the growers of the heavyweights. For them, pumpkin growing is a competitive sport. As recently as 16 years ago, the heaviest (official) pumpkin weighed a mere 403 pounds. Since then the world record has been broken nine times. Other than Howard Dill, who held the world record from 1979 to 1982, no one has ever won the world championship more than once. And almost all the world-record pumpkins since 1982 have been grown in small backyard gardens.

Well, not too small. To really appreciate the feat of growing these 800-, 900- or 1,000-pound behemoths, it’s necessary to see one up close. Consider the measurements of the second-largest pumpkin grown in the world in 1994. Its girth was 176 inches (that’s more than 14-1/2 feet around!). When carved, these beauties will hold a candle for light, as well as two or three members of the family. Or you can bake some 900 pumpkin pies from a single fruit. At the Topsfield Fair in Topsfield, Massachusetts, it took the strength of 12 adults to move a 914- pound pumpkin to the scale. I can’t pass a Honda Civic anymore with- out thinking that 10 or 12 men could probably roll it onto a tarpaulin and cart it away, too.

Now, with this year’s competition just past and predictions that the largest pumpkins are likely to surpass the benchmark half-ton next season, is a good time to review the latest techniques required to grow “the big ones.” Believe it or not, you’ll probably need to start now, in the fall, preparing the soil.

The guru of monster pumpkin growing is Howard Dill. His behemoths have won more world records than any other grower’s. His Atlantic Giant is the variety of choice for anyone who wants to grow a big pumpkin.

How To Grow A Giant Pumpkin

If you ask 10 competitive pumpkin growers how to grow a giant pumpkin, you’re likely to get 10 different answers. It seems everyone has his or her own way of coaxing the most weight out of these giants. But there is a thread of consistency that runs throughout all the instructions, and adhering to three basic tenets will get you well on the way to a world record. Above all else, you need good seed, good soil and good luck.

Good seed. If you want to grow a world-record pumpkin, you can forget about every variety of pumpkin out there except Howard Dill’s patented Atlantic Giant. Since 1979, no other pumpkin variety has been a world champion. Good soil Pumpkins are large consumers of all the major plant nutrients (nitrogen, phosphorus and potassium), as well as many minor nutrients like calcium and magnesium and other trace elements. The key for big growth is soil well amended with organic matter. In the fall or early spring, add two to five yards per plant of compost and rotted manures. Cow and horse manures are best. Use chicken manure sparingly and only in the fall. Cover crops of winter rye, plowed down in the spring, are fabulous. The soil pH should be between 6.5 and 6.8.

Good luck. If you can grow a good vegetable garden, you have the skill to grow a world-record pumpkin. I’ve seen newcomers grow 500-pound pumpkins their first year with good seed, some rudimentary help from an experienced grower and a lot of luck. With the right preparation and strategy now and in the spring (see the text on page 40 for tips on planning your assault on the world record), next year you might just be a contender for the world championship!

1. PREPARE THE SOIL. Start with a pH test in fall and adjust your pH to between 6.5 and 6.8 by adding sulfur to lower the pH or lime to raise it. Apply three to five yards of composted manure per 30-foot-diameter circle where you expect to plant next spring. Plant a cover crop of winter rye in fall to be turned under in early spring, broadcasting one to two pounds per 1,000-square-foot area.

2. SOW SEEDS. Start seed indoors in six-inch peat pots about four weeks before your last spring frost date. Plant the seed with the pointed end of the seed facing down. Keep the soil temperature at 85 to 90 degrees F. Most seeds will emerge within five days.

3. TRANSPLANT SEEDLINGS. Transplant seedlings into the garden once the first true leaves appear or when roots begin to grow through the peat pot (usually seven to 10 days after germination). Handle with care because pumpkins are easily set back during transplanting.

4. PROTECT SEEDLINGS. Place a “mini-greenhouse” over the seedlings for six weeks to shield plants from wind and frost. These mini-greenhouses can be as simple as two storm windows nailed together to form a teepee or as elaborate as a four- by four-foot wooden structure made from 1×2 lumber nailed together with 6-mil clear plastic stapled to cover the frame. Once seedlings outgrow the mini-greenhouse, use a temporary fence to screen wind. I use “conservation” fence, which is bought with wood end stakes attached and is commonly used at new construction sites. A 100-foot roll cut into three pieces is enough for three 11-foot-diameter areas.

5. POLLINATE FLOWERS. Eight to 10 weeks after seed starting, the first female flowers will appear. They’re easy to distinguish because they have a small pumpkin at their base. If you want to get a jump on your rival, you’ll need to hand-pollinate the flowers. In the early morning, locate a freshly opened male flower. Pick it and remove the outer flower petals, exposing the stamen and fresh pollen. Locate a newly opened female flower and gently swab the stigma (internal parts) of the female flower with the pollen-laden stamen.

Getting a pumpkin set as early as possible, preferably before July 10, is key. The earlier you set a pumpkin, the longer it has to grow until harvest. Since these monsters can gain 25 pounds a day, losing 10 days in the early part of the season could put you well down the list at your local pumpkin weigh-off.

6. REPOSITION SET PUMPKINS. Once a pumpkin has set, its position on the vine becomes extremely important. Most often the stem grows at a very acute angle to the vine. However, for optimal long-term growth, the best position is to have the stem perpendicular to the vine. If yours is not at right angles to the vine naturally, coax it gradually, over about a week’s time, until it is in that position. Be careful, because at this early stage pumpkins may still abort or you may injure the fragile stem.

7. SELECT THE MOST PROMISING PUMPKIN. If one plant has three strong vines, you could have as many as seven or eight pumpkins set and growing by July 20. Now you must choose the best pumpkin and remove most of the rest. Measure each pumpkin’s circumference at the widest point weekly or daily with a cloth measuring tape. Choose the one that’s growing fastest. Also, keep an eye out for the optimum shape. Young pumpkins that are round and especially tall grow the largest.

8. PRUNE VINES. Begin pruning vines early in the season to discourage random growth and an out-of-control patch. Prune each main vine when it has reached 10 to 12 feet beyond a set fruit. If you have a pumpkin on a vine that is 10 feet from the main root, cut the end of that vine once it is 20 to 24 feet long. Let side shoots off the main vines get no longer than eight feet before cutting off tips. Train side shoots so they are perpendicular to the main vine to accommodate access to the vines and pumpkins. Bury the ends of cut vines to reduce water loss.

9. FERTILIZE. During the growing season, most fertility needs of pumpkins can be met by applying water-soluble plant foods once or twice a week over the entire plant area. Give seedlings a fertilizer that stresses phosphorus, such as 15-30-15. Shift to a more balanced formula, such as 20-20-20, once fruits are set.

By late July, use a formula that stresses potassium, such as 15-11-29. I apply water-soluble fertilizer at the rate of one to two pounds per week per plant from fruit set until the end of the growing season. Some competitive growers will err on the side of overfertilization. But too much fertilizer can hurt more than help. If the pumpkins start growing too fast, they will literally tear themselves from the vine and explode. A very fine grower in New England told me, “Slow and easy wins the race.” Remember this whenever you feel the urge to overfertilize.

10. KEEP TRACK. Measure your pumpkins at least weekly. Gains in circumference can average four to six inches in a 24 hour period. Measure the circumference of your pumpkins first parallel to the ground around the entire pumpkin, from blossom end to stem. Next, measure over the top in both directions: from ground to ground along the axis from stem to blossom end, then perpendicular to the stem-blossom-end axis. Add these three measurements together, then multiply by 1.9 to give an estimate of the pumpkin’s weight. 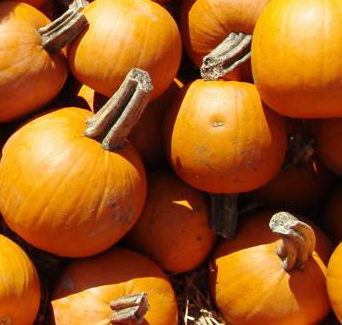