I hate to brag …. but I did something last spring that has given me more pleasure this summer than just about anything else in my garden.

I decided back then to grow raspberries … and to do it right.

This June I stuffed my face with juicy red fruit for three weeks. Whenever I needed a break from planting or weeding or watering I turned to the bramble arbor and picked thumb-sized berries to my heart’s content. My son and I picked three plastic containers-ful in just a few minutes one day.

Last year in April my berry patch was a mess, sprawled over everything nearby. How did I get such good results in just over a year?

RAISED BED My first step was to decide where I really wanted the vines to grow. They need full sunshine so I found a spot along my back property line. One of the reasons my initial patch was such a failure is that raspberries send up root sprouts many inches from the parent plant. I resolved to dig all of the existing plants and their progeny, build a raised bed two feet wide and twenty feet long, and replant my thorny friends inside it.

I filled the raised bed with well-amended soil before I planted. Since the area around the bed is hard clay, I figured that roots would find it inconvenient to escape their comfortable confines in the bed.

At each end of the bed I firmly buried a wooden post extending five feet aboveground. Between the posts I strung three lengths of twelve gauge clothesline wire, at twenty four, forty two and sixty inches above the soil.

With leather gloves, sharp pruners and an up-to-date tetanus shot I removed dead canes from the raspberries I’d previously dug. I left the green canes on the plant, knowing that they would provide the energy to grow strong canes in summer, which canes would flower and fruit this June.

And that’s all I did. No spraying, infrequent fertilizing and occasional watering was all the care I provided last year. I had no fruit… but I didn’t expect any, knowing I’d harvest my reward the next summer.

GOOD VARIETIES Most of my plants are ‘Dormanred’ trailing raspberry but they are mixed with a couple of un-named plants I salvaged from behind a cottage at Wahsega 4-H Camp a few years ago. I also have a ‘Kiowa’ erect blackberry mixed with the raspberries. ‘Kiowa’ has satin fruit almost as big as a golf ball but it is the thorniest plant I’ve ever seen!

‘Heritage’ erect raspberry does well in the upper half of Georgia and there are several blackberry varieties that also thrive here. The culture of all of these brambles is similar. If you have a lot of space the erect varieties can be grown with minimal arborage but I prefer the wire system for a small plot. The three wires give me something to tie wayward canes to when they grab my ankles and they make picking the fruit so much easier.

MINIMAL CARE NEEDED If a plant needs coddling it has no place in my garden. I don’t grow peaches or plums for that reason. I suppose I could grow dwarf apples but even they require a couple of pesticide sprays for optimum production.

Raspberries and blackberries have hardly any pests. Japanese beetles sometimes attack the fruit and leaves but this year the last fruit was picked before beetles became a nuisance. Blackberries sometimes get rust disease but it is not so troublesome as the scab, fire blight and brown rot which attack tree fruit.

Blackberries and raspberries produce fruit on canes that grew the previous year. Mid-summer jobs include an application of 10-10-10 fertilizer and sufficient water to avoid wilting. True, the canes that fruited this June need to be removed as they fade but that is not a terrible chore. I attend to it every few days, just as I attended to the tying up of wandering young canes back in May.

OTHER LOW CARE FRUIT I’m sold on raspberries for my garden but your family may have a different hankering. Rabbiteye blueberries are just about as pest-free as brambles and best of all, they don’t have thorns! Muscadine grapes are mouth watering in September and require little more than an annual pruning in January. Despite their attractiveness to birds, figs are another fruit that yields great bounty with little management.

FACTSHEETS TO GET STARTED Any landscape has room for edible plants. It may be herbs, vegetables, fruit or even nuts. Imagine the pleasure you’ll get from eating something you’ve personally cared for and harvested! Even if you have never tried it before, your local county Extension office (800-ASKUGA-1) has free brochures which cover everything you need to know to get started.

I’m sure you’ll find that small fruit, particularly raspberries, can be berry, berry good in your garden. 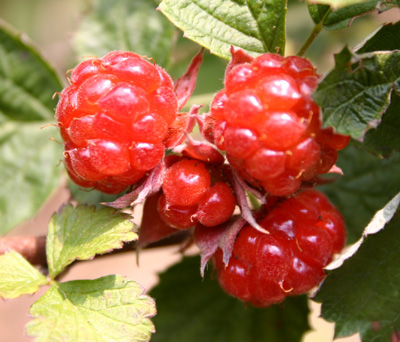 Tags For This Article: fruits, raspberries