Home » Gardening Q and A » Chickweed – In New Lawn

Q: This past fall, I did all of my due diligence in prepping my yard for the fall fescue growing season. I aerated, seeded, and fertilized. In fact, when I rented the aerator, it had just rained, so I was turning the soil over very good in addition to pulling plugs. My yard at the time was a mixture of different weeds with some left over grass mixed in.

A few days after the planting, I noticed little leaves popping up that were not grass! I let it go and the grass slowly starting coming up as well. Now, the entire back yard is over run with this weed. Being it’s now January, what would you recommend?

A: Wow – you have quite a crop of chickweed! This annual winter weed germinates from seed each September – November. When you tilled the yard, you unearthed and scattered lots of seed that were lying dormant in the soil. Now they’ve all decided to come up at one time!!

Since chickweed competes with your lawn grass, it needs to be killed. However, you don’t want to hurt the grass with a weed killer either.

I recommend you use Weed B Gon Chickweed, Clover and Oxalis Killer at half strength. Wait four weeks and use it again. If there is any chickweed left, spray it a third time a few weeks after that.

Next fall. spread some Portrait pre-emergent in early September and early November to prevent any weed seed from sprouting (though you won’t be able to plant grass seed). 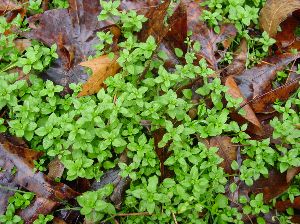 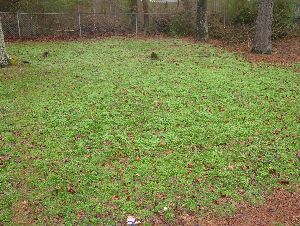