Home » Insects and Animals » Armadillo – Where Found in Georgia

When I received a photo of a newly planted bed of mondo grass that had been plowed up overnight, I immediately thought “armadillo!”.

But the damage was done in Dunwoody…not a part of the state where folks have complained about them to me.

I posted a question on Facebook, asking where folks had seen evidence of armadillos, primarily their dead bodies along highways.

The response was eye-opening!

Astute observer Billy H. says: “Last Memorial Day weekend I drove from Conyers, Ga to Wisconsin on some family matters. Driving up I-75 I noticed several dead armadillos along side the interstate. I wondered how far up Georgia I would see my last one.  After going up Monteagle and through Chattanooga, I was now on I-24 and still saw road kill armadillos.

I continued through Nashville and entering Kentucky every one or two hours would see another dead one. Surely I thought as I approached Paducah, KY, where the Ohio river is a half mile wide here…this will be the last of them.

Nope!  the last armadillo I saw dead was on the side of I-57 north about 45 miles south of Mt. Vernon, Illinois.

I saw no more after that. 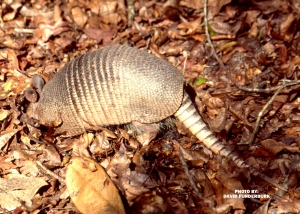