We do a lot of dirt digging in spring and sometimes discover white grubs in the soil. The grubs are immature beetles (Japanese beetle, May beetle, June beetle, etc) which feed on plant leaves in June.

The grubs themselves feed on turfgrass roots…..but almost all of the damage they do is in fall.

Grub control products appear on store shelves in spring, claiming to provide season-long grub control. Certain insecticides, including imidacloprid (Merit) and halofenozide (Mach 2) do have a very long residual in the soil. However, they should not be applied to lawns until later in the summer by both homeowners and professionals.

1. The goal of white grub insecticides is to prevent turf damage, not eradicate grubs. Grub damage in the spring is very minimal and only seen in the driest of years. Since there is a limited chance of significant grub damage, why apply?

2. Grubs found in the turfgrass right now are very mature and extremely difficult to kill, so insecticides applied now will not be very effective.

3. Even if you could control grubs now, it will have no effect on the population of grubs come next August when the really damaging generation hatches.

4. Insecticides applied now will biodegrade over time and may not remain in the soil at high enough concentrations to be effective in August when we really need them. Certainly, they will be more effective if applied closer to the egg hatch date (early August).

For these and other reasons, you are better off waiting until mid-July through mid-August to apply white grub insecticides and then only apply if your lawn has experienced perennial damage from grubs or if you find more than five grubs per square foot. 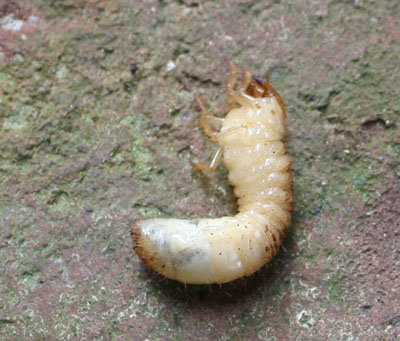 Tags For This Article: grubs, insects