Home » Insects and Animals » Owl – In the House

Q: I had an owl get in my house one night via an open fireplace flue. We aren’t sure how the owl got the glass doors open over our fireplace. Somehow it got out and it flew from the downstairs den into the foyer. It then went into an upstairs bathroom and landed on the shower curtain rod. We closed it in that room until we could make an escape plan for it.

We closed all other doors, upstairs and down, and then opened the front door. That limited it to the upstairs hall and foyer. After that it was just a waiting game. It perched on the chandelier and went all the way to the top into a trey ceiling. It seemed to be fairly docile and would watch us as we watched it.

It tried to get out through the large window over the front door several times. We were very concerned that it would injure itself so gave it some time to settle. After sitting on the banister for a while it flew again to the window, then dropped down onto the door. It seemed fairly content and appeared to be sleeping. It sat there for about an hour only turning its head when we approached. I finally got brave enough to take several steps toward it and then it flew out the front door.

As soon as it got into the trees, two hawks swooped past. When the owl flew off, the hawks flew after him. I haven’t seen the owl or the hawks since. We have often heard owls hooting, day and night, but have only seen one as it flew by at night. It was quite an experience! Can you identify which type of owl this was?

A: I’m thankful your owl is OK. My neighbors started a fire in their fireplace and a severely singed screech owl flew out of the fireplace and into their den. It dies quickly but it was tough cleaning the black smudges off the den walls.

Despite the risk of bird tragedy, I keep my chimneytop open to provide habitat for chimney swifts in the summer. These acrobatic birds migrate into Atlanta each spring, raise their young in chimneys and hollow trees and depart in fall. I delight in hearing the excited chirps of the youngsters when adults “whirrrrrr” into the chimney bringing insect food.

I found an excellent owl identification website that will help you identify any other denizens of the night that you encounter. 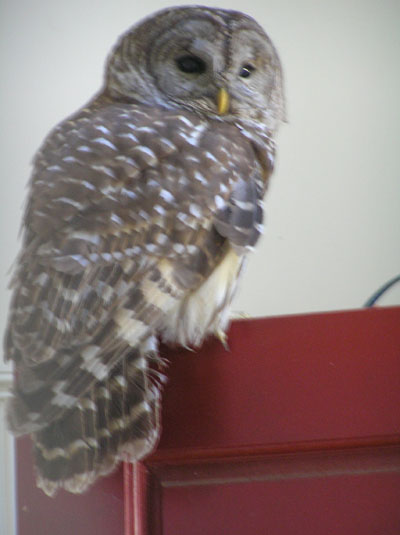