Q: These critters are on my Japanese maple and English laurel. They are not bagworms but what are they?

A: Don’t touch them!! They are puss caterpillars, Megalopyge opercularis.

What looks like soft hair actually covers a mass of poison-tipped spines. They BURN BURN BURN like the dickens when touched.

The adult is a small moth.

Puss caterpillars feed on foliage of a variety of broadleaf trees and shrubs. Some common tree hosts are apple, elm, hackberry, maple, oak, pecan, and sycamore. Two generations are likely to occur each season in one in spring and early summer and one in late summer and fall. For some reason, most reports of stinging caterpillars, whether saddleback, oak slug or hag moth, seem to occur in September –  October.

In the words of the Bugs In The News website,

“The puss caterpillar is considered to be near the top of the list in terms of the severity of its sting.

“Because they appear to be small, innocuous pieces of fluff, children and adults alike are led to pick them up and play with them, usually with immediate, extremely painful results. The spines, hidden among the hairs, are hollow, and release a toxin of unknown chemical composition that produces a skin lesion.

“The lesion usually begins as a halo of reddened skin surrounding the sting site. This is soon followed by the appearance of a number of small cysts that gradually develop into a matrix of blood-filled lesions where the mass of spines punctured the skin. This clinical presentation is characteristic enough, generally, to permit physicians to make a diagnosis of the cause even in the absence of the caterpillar.”

I would use gloves and newspaper to grab them and put them in a container to be destroyed. Fortunately, you likely won’t see them again…their population is typically very small. 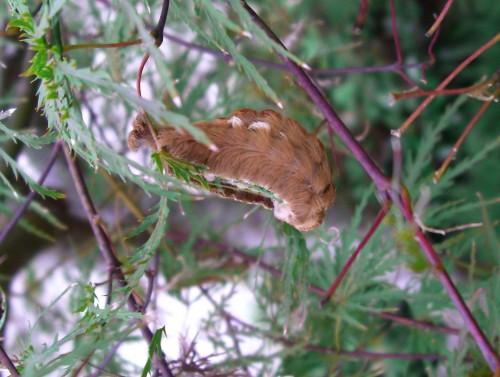 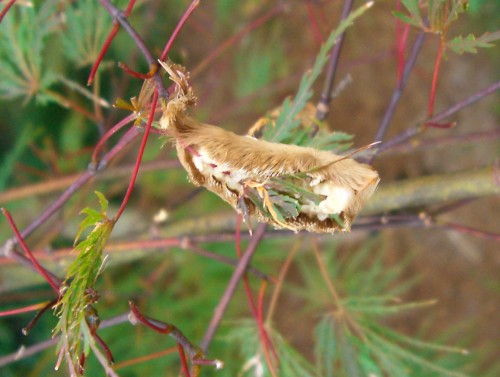