Q: I was cleaning some leaves from my small pond a week ago and my leg brushed up against this little devil. It stung worse than a bee sting! It is the weirdest little “caterpillar” I’ve ever seen. And it has white cocoons on its back too!

A: I’ve been pestering my neighbors for two weeks to help me find a saddleback caterpillar…all they could offer were argiope spiders….but you came through!

I clearly remember my Uncle Grey coming into the house after brushing against one in our pear tree in 1959. His ear was fiery red and we put ice on it to sooth the burn.

Saddleback caterpillars are insidious because they are so well camouflaged. Their green skin blends perfectly with the leaves on which they feed. And they feed on LOTS of different plants: canna, banana, lily, redbud, apple, pear and many more.

It will later turn into a fuzzy, dark brown moth.

The best advice I can give is to wear gloves when weeding in September and watch out for them. Unlike with wasp stings, meat tenderizer or ammonia applied to the welt don’t seem to help.

The remedy we applied to Uncle Grey’s ear (ice) is still the best.

The white things you saw on the caterpillar are cocoons from braconid wasps. They laid eggs on the unfortunate caterpillar in late August, consumed part of his insides and have now emerged to pupate.

Although the caterpillar is suffering, I don’t have much sympathy. 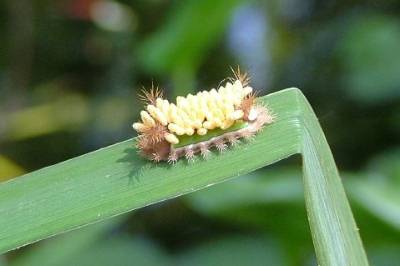 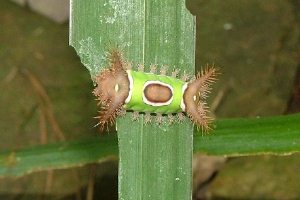