When I was asked what could cause spiraling grooves of damage to a zucchini squash, I was initially perplexed. Nothing I know of would make that sort of damage.

It was posted on Name That Plant and it received several cute explanations…but none that seemed reasonable.

So I published it in my email newsletter, appealing for help, and got an answer!

Astute gardener Kimberly P. noticed the same damage on her yellow squash fruit…plus the presence of a bright yellow critter on the stems and leaves.

She sent pictures….as did a gardener in Gwinnett County.

Ah Ha! Something I recognized! The bug is the larval form of a squash beetle, Epilachna borealis. It typically skeletonizes leaves but a publication from Purdue University notes that

“The squash beetle adults and larvae cut a circular trench in the leaf before feeding.”

So if a beetle adult or larva should be displaced onto the fruit, it stands to reason that they’d cut a circular trench in the skin: exactly what’s seen in the photos below.

But not so fast!!

Sam F., who sent the original post, says ” I’m still not 100% convinced that squash beetles are the cause. In fact, I essentially ruled them out early on (not completely, but to a large extent until I have more evidence).

It’s true that they do make semicircular narrow trenches in leaves (to, according to the University of California,  excise vascular tissue and compartmentalize the tissue they’re feeding on so as to prevent the plant from pumping in natural anti-pest defense chemicals), the shapes in the fruits are circular or spiral, not semi-circular.
Then after the squash beetle compartmentalizes a cucurbit leaf area, it consumes the tissue between the veins and skeletonizes that area within the leaf trench. This secondary feeding is not apparent on any fruit photos I’ve seen. From an energetic standpoint (I’m an ecologist), I don’t understand why these critters would expend that kind of energy and then not feed on the delineated areas!
And the big thing that stands out to me is that the circles and spirals that are in multiples are in the same plane in almost every instance. Moreover, the multiple circles line up more or less in parallel to the length of the fruits, similar to the way stalks would be oriented.
So, to be convinced, I’d like to see these critters actually making these patterns and I’d really love for someone to bring a scarred fruit in so I can see the scars under magnification. How deep do they go? How wide are they? Are they consistently the same width? Is there frass in some of the areas scarred? Etc.
Ultimately, squash beetles may well be the culprits but ecologically I’m not understanding “what’s in it for them?” 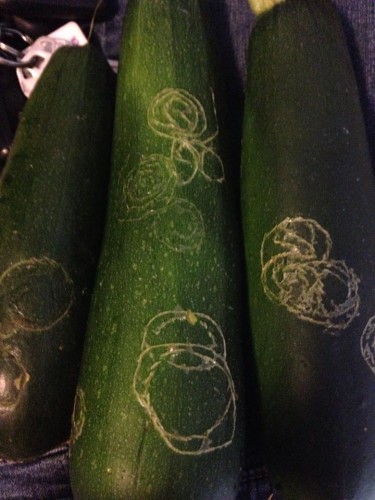 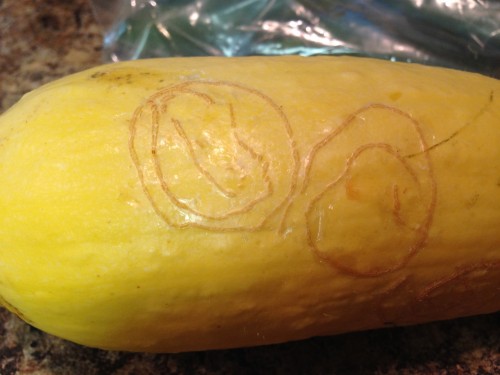 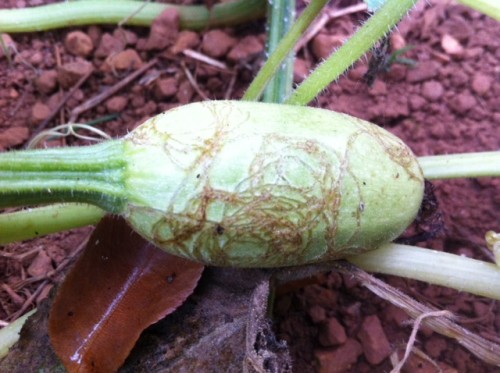 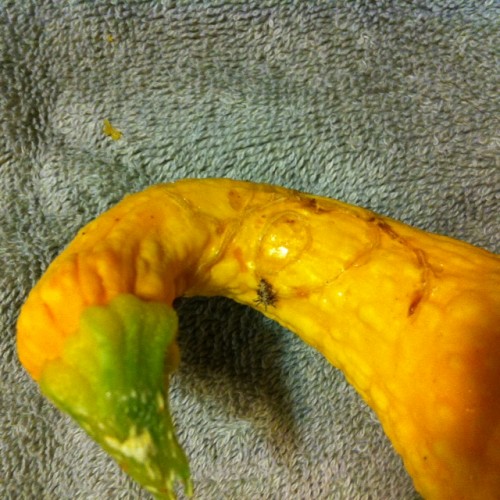 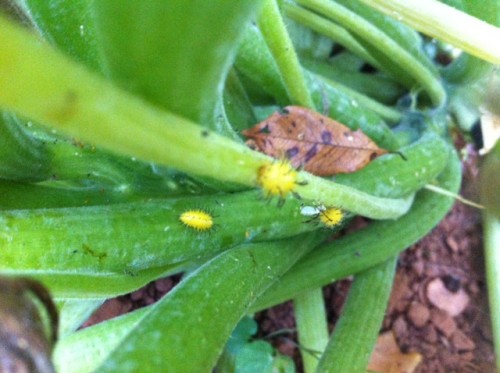 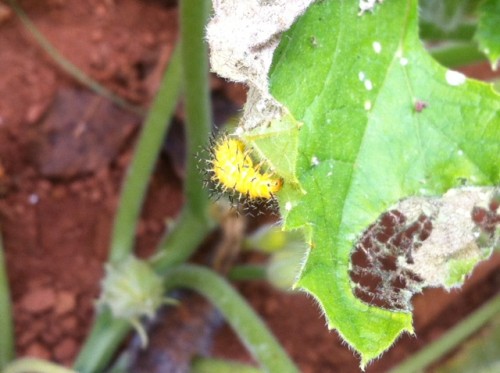