The corn poppy (Papaver rhoeas) gets its name because it commonly grows amid fields of cereal grains such as wheat or oats – sometimes referred to as “corn” in England, Ireland and Scotland. (In America we use the word to refer to maize, a crop that provides too much shade for the poppy to grow among.)

This native of Europe, North Africa and Asia is considered a weed, albeit a beautiful one, in agricultural fields because it competes with grain plants and diminishes production. The same is true for the more common cornflower (Centaurea cyanus) whose name shares the same etymology.

In our gardens, however, corn poppies are useful and easy-to-grow annuals, providing a burst of color – and no color bursts forth with more power than poppy red – in late spring and early summer before the zinnias and marigolds are starting their show. The poppies also provide grace with their nodding buds and their petals that unfurl like wrinkled silk and move with every breeze.

The best time to sow corn poppies is in September or October. Corn poppies do not transplant well, so sow the seeds directly into the soil where you want them to grow. I also scatter a few seeds as I collect the pods when they begin to dry in June. The seeds are small and do not need to be covered.

Besides the color and grace corn poppies bring to my garden, they also remind me of a beloved poem:

In Flanders fields the poppies blow
Between the crosses, row on row
That mark our place; and in the sky
The larks, still bravely singing, fly
Scarce heard amid the guns below.

We are the Dead. Short days ago
We lived, felt dawn, saw sunset glow,
Loved and were loved, and now we lie
In Flanders fields.

Take up our quarrel with the foe:
To you from failing hands we throw
The torch; be yours to hold it high.
If ye break faith with us who die
We shall not sleep, though poppies grow
In Flanders fields.
John McCrae (1872-1918)

“In Flanders Fields” was written by Lt.-Colonel John McCrae, M.D., of the Canadian Army. He wrote the poem following the death of a young friend and former student, 22-year-old Lt. Alexis Helmer, on May 2, 1915, at the Second Battle of Ypres. Helmer had left his dugout and was killed instantly by a direct hit from a German shell. What body parts could be found were buried that evening. In the absence of the chaplain, McCrae conducted a simple service at the grave which was marked with a wooden cross. McCrae also died in France during the war of pneumonia after four years of service on the Western Front.

Several years ago, driving back from Athens, I stopped to walk around a cemetery in Monroe, Georgia. To my surprise I came upon the grave of Moina Michael, the woman who – inspired by McCrae’s poem – campaigned to make the corn poppy a symbolic reminder of the soldiers who died in World War I.

My poppies have been in bloom for a couple weeks in mid-May and will still be in bloom for Memorial Day. As I look across my mini-field of poppies with their silky red petals as vibrant and fragile as life itself, I think of the soldiers who died so that I could sit around writing about flowers and poetry.
– Arty Schronce

Inspiration for the poem ‘In Flanders Fields’ by John McCrae.

“Arty’s Garden” is written by Arty Schronce, Director of Public Affairs for the Georgia Department of Agriculture and a lifelong gardener. 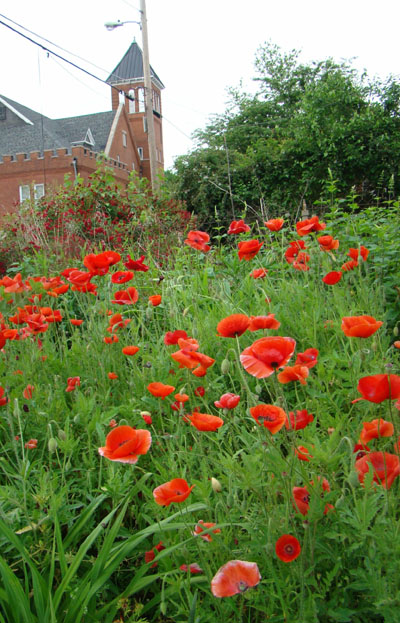