Home » Landscaping » General Garden Info » Hardiness Zones – Which One Are We In?

Q: I have seen several different Hardiness Zone maps for Georgia. Which one should I use to determine which plants will grow here?

A: You’re right – it’s confusing. Read below to get an overview but click here to find your personal Hardiness Zone by ZIP Code. 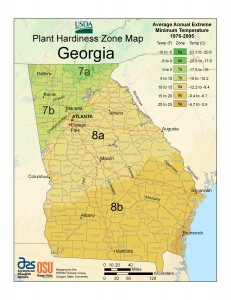 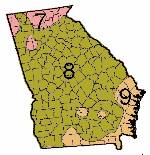 The zone map story actually begins in Germany, in the early 1800’s, where a geographer used lines, called isotherms, to delineate regions of equal temperatures in Europe.

The United States Department of Agriculture in 1960 mapped and divided the U.S. into ten zones based on a 10 degree difference in the average annual minimum temperature between each zone. 1960 US Hardiness Map

Zone 1 included parts of Alaska where their two growing seasons are divided into “winter and the Fourth of July” . Zone 10 encompassed areas in Florida where long pants are considered cold weather dress.

The hardiness map was revised in 1990, dividing each original zone into two sub-zones, contrasting with each other by only a 5 degree difference in winter low temperatures. Most of the metro Atlanta area fell into Zone 7b, where low winter temperatures are between 5 and 10 degrees. 1990 GA Hardiness Zones

In 2003 the map was tentatively revised again (2003 USDA map), based on more current temperature data. It has 15 Zones. The revision was not met with much enthusiasm by gardeners across the country and has not been “officially” released by the USDA. 2003 GA map

Just to make things even more confusing, the National Arbor Day Foundation constructed its own Hardiness Zone map relying on the same data as the 2003 USDA map but dividing the country into only 10 Zones. 2006 Arbor Day Map

Go to the Arbor Day site to see a comparison of zones in their map to previous maps.

Want some MORE fun? Sunset magazine, which is well-respected on the West Coast, devised a map having 45 Zones. Most West Coast gardeners rely on this map rather than the USDA map. Sunset US Map and Sunset GA Map

HEAT ZONES Realizing the effect that heat and humidity have on plant hardiness, the American Horticultural Society divided the United States into twelve zones, divided by the average number of days each year that a given region experiences temperatures over 86 degrees.

The zones range from Zone 1 (less than one day above 86 degrees) to Zone 12 (more than 210 days). Fortunately, most of the Atlanta area is in Heat Zone 7, which is generally identical to our USDA Cold Hardiness Zone. AHS Heat Zone Map

Most plant labels include the zones in which the plant will prosper. If the information label on plant you are considering says it is hardy in Zone 7, it will usually survive our winter just fine.

See also: Understanding Georgia Plant Zone Maps, either the PDF or the website.

HOW DO OTHER ATLANTA GARDENERS USE HARDINESS ZONE MAPS

Theresa Schrum: “I measure by the lowest winter temperatures recorded.”

Shannon Pable: “We all must do our homework!”