Q: This grass appeared in one of my flower beds three years ago. It is massively aggressive, and has choked out everything in the bed. Frequent attempts at pulling it up are futile. It is about waist high, tough, like a saw grass, and spreads by runners two inches under the ground.

This is the first year it has had plumes on it, and I am terrified that the seeds are going to go everywhere in the yard. I noticed this afternoon that the seeds were beginning to “fluff” out on a couple of heads, so I have pulled off every single plume I could find and have disposed of them.

What do you know about this grass, and where the heck it might have come from. I’ve never encountered it before. The plumes are pretty, about 6-8″, and sort of purple.

A: You have Japanese bloodgrass, Imperata cylindrica. The variety ‘Red Baron’ is sold at nurseries but you have seen the reason it should be forbidden: the grass occasionally reverts to its green form and becomes terribly invasive.

I once had a similar problem with chameleon plant, Houttuynia cordata, in my daylily beds.

The ONLY way I could get rid of it was to dig every lily, wash off the roots, separate the bad plants from the good ones and plant the daylilies in a new bed.

EVEN THEN a bit of the chameleon plant sprouted in the new bed….where it was promptly yanked up.

You have an even harder plant to control. The underground rhizomes of bloodgrass are impossible to separate from those of good plants.

I would spray the entire bed with Roundup, wait six weeks and spray any surviving sprouts again. DO NOT plant anything in the bed until next May, when you can determine if your control efforts have been successful. If not, spray the noxious bloodgrass once more. 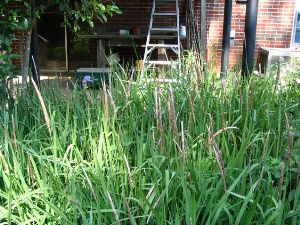 Tags For This Article: invasive, Roundup