Many gardeners have noted a heavier than normal acorn crop in 2011. They report a constant barrage of nuts falling from white oak, water oak and red oak trees. One even carries an umbrella to protect her head while walking to her compost pile!

Nut trees typically produce in an “on year – off year” pattern. Pecan growers are well aware of this and use fertilizer and water to minimize the swings in yield.

Forest trees follow the same pattern. Hickory nuts and acorns will have a big year followed by a season of scant harvest. Oak species in the white oak group (two of which include Quercus alba and Quercus virginiana) have acorns that mature in a single year. Those in the red oak group (such as Quercus rubra, shown below, and Quercus georgiana) have acorns that take two years to mature.

The drought-free growing season of 2010 probably had the most effect on acorns this year. Trees have not been terribly affected by drought this year and they are responding as Nature intends.

If you have an oak tree, you’re well aware of the numerous sprouts that pop up in spring from the fall acorn crop. There’s not much you can do about it other than clip the sprouts as they’re seen.

I supposed you could attempt to vacuum up acorns this fall but it will be a back-aching task.

There’s no way to prevent the heavy nut fall……you’ll just have to carry your umbrella (or a dinner plate!) and step carefully on the acorn “ball bearings” when you see them. 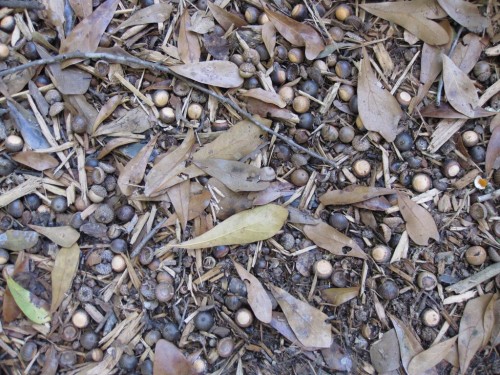