My friend Dan C. contributes this:

Having grown up in Florida, I had certainly heard of a loblolly pine, but never thought about the name. Here’s some interesting/informative information. I was reading a novel (set in the early 19th century) in which the term loblolly was used on a merchant ship, referring to a porridge. I had never heard the term in that context, so I looked it up.

“Loblolly is a combination of lob, probably an onomatopoeia for the thick heavy bubbling of cooking porridge, and lolly, an old British dialect word for “broth, soup, or any other food boiled in a pot.” Thus, loblolly originally denoted thick porridge or gruel, especially that eaten by sailors on board ship. In the southern United States, the word is used to mean “a mud hole; a mire,” a sense derived from an allusion to the consistency of porridge. The name loblolly has become associated with several varieties of trees as well, all of which favor wet bottomlands or swamps in the Gulf and South Atlantic states.” 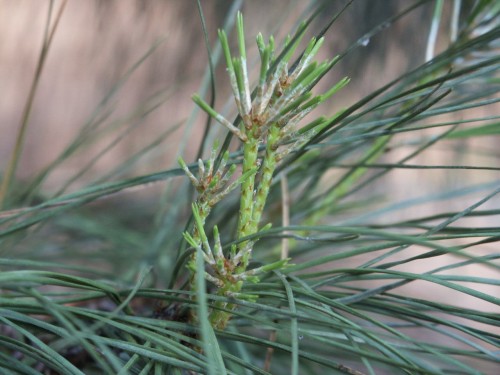