I’ve been thinking recently about the mystification that plant “common names” can present to gardeners. Common names are just the familiar names we attach to plants: maypop, skunk cabbage, obedient plant and a host of others. They aid our pronunciation as well. Who wouldn’t rather say centipedegrass than Eremochloa ophiuroides?!

Common names are reassuring; they use conventional English to describe a physical characteristic (balloon flower, gooseneck loosestrife), time of flowering (Lenten rose, daylily), use in the garden (butterfly bush) or some other feature. The origin of some common names, though, is lost in the mists of time. Why is titi called titi? Who was the Sharon for whom Rose-of-Sharon was named? Does privet get its name from its association with backyard privies across the South?

More daunting is the “scientific name” of a plant. Words like Hemerocallis , Platycodon and Helleborus are rarely heard outside the conversations of committed gardeners. I was intimidated by them myself when I began writing about plants. Only because Mrs. Inez Hames was convinced that poor, rural Fayette County school children could benefit from the study of Latin do I recognize plant words like alba and uniflora and dentata.

As I began to write more and more about plants, I came to recognize the utility of having a common plant language across country and communication boundaries. Now I understand that a Quercus nuttallii is a Nuttall oak…… but more importantly, a Quercus nuttallii is the same plant in France, Fiji or Finland. For that matter, so is a Hibiscus syriacus (Rose-of-Sharon) and a knowledgeable gardener anywhere in the world would recognize it is different from a Hibiscus mutabilis (Confederate rose).

Scientific names also allow us to classify plants into families and hierarchies. All Acer‘s are maples, but Acer rubrum is specifically a red maple. All Quercus‘s are oaks but Quercus rubra (red oak) is different from Quercus stellata (post oak). Quercus virginiana (live oak) is distinct from the other two and all other members of the Quercus species.

No matter where in the world I see a plant name that begins with Quercus I know it is a member of the oak genus. If I study the last word of the plant name (the epithet) I can sometimes take a stab at the common name. Mrs. Hames would be proud to know that I once used my eighth grade Latin to figure out that Quercus alba was a white oak.

Our own lineage is much like the system for naming plants scientifically. Take my family for instance: Frank Reeves and Frances Cowart married and produced five hybrid offspring. Walter, the eldest, received genes carrying a love of science and speaking. Robert, the art dealer, inherited genes for an appreciation of beauty and order. Alan, the environmentalist power plant manager, acquired a passion for nature and the outdoors. Carol, the professor of business administration, must have closely observed her father, who was treasurer of the local Methodist church for fifty years. Nancy, the computer programmer, is able to keep myriad details organized, just like her mother, the tax accountant and community activist, does.

Walter, Robert, Alan, Carol and Nancy are all members of the Reeves family, yet they are completely different from each other. One might say they belong to the Reeves genus, just as oaks belong to the Quercus genus. Their given names distinguish the member of the Reeves family who is able to detail the provenance of a face jug from the one whose students wear plastic face masks resembling a razorback hog.

A friend, a reading specialist, knows the importance of words and names but she has had quite a time remembering the common names (much less the scientific names) of the plantsplaced in her landscape. She doesn’t care for the metal markers (too institutional!) but she’s taken to labeling plants with small clay pots, on which the plant name is written with grease pencil. An aluminum gutter spike secures the pot to the earth. She can now comfortably identify oakleaf hydrangea (Hydrangea quercifolia) versus bigleaf hydrangea (Hydrangea macrophylla) for her visiting garden club buddies.

I make it a practice to use the common names of plants in my media efforts. They are less intimidating and more likely to help educate my readers, listeners and viewers. When need be, though, I sling Salix and Sarcococca and Syringa with my hort-head comrades. You may find, like me, that if you pay attention to the common names as well as the scientific names of your plants, your gardening enjoyment will be enriched as you try to decipher the source of a plant’s two appellations. 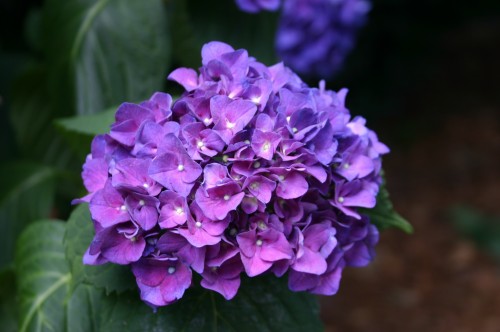 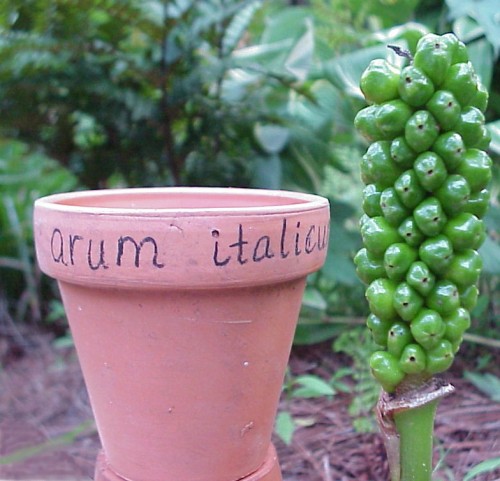