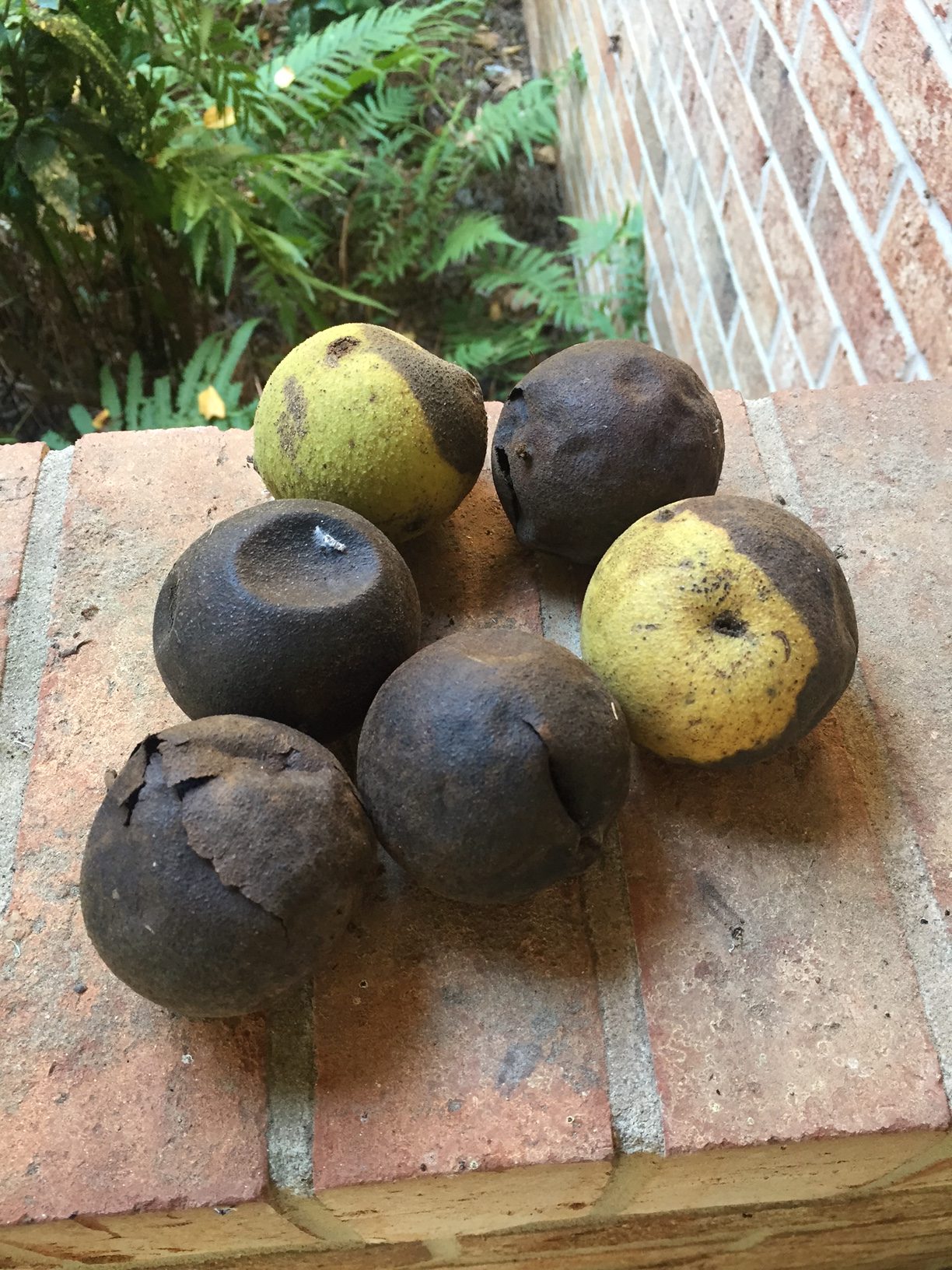 Q: I have a black walnut tree in my yard that has dropped copious amounts of nuts this fall. Is there an easy way to get the nut meats out of the hard shells?

A: There is a small depression still existing in the concrete well cover in my parents’ side yard where my brothers and I used to pound black walnuts with a hammer. With every third or fourth one, we’d miss the nut, smash a finger, fling the hammer into the weeds and swear never to try to get the nutmeats out again. A week later you could find us with a hammer held in bandaged fingers attempting the impossible again.

Old-timers swear by the efficacy of cast iron corn shellers for removing the green walnut husks. Others tell tales of running over a pile of the nuts with the family car. The Georgia Farmers and Consumers Market Bulletin says that drying the nuts for a few days after cracking them makes the nutmeats smaller and easier to remove. Can American ingenuity solve the knottiest (nuttiest?) problem of the twenty-first century? If you know a good way to shell black walnuts, email me!

Q: I heard you discuss the different methods of cracking black walnuts on your radio show but didn’t get all the particulars. Could you reiterate?

A: I was amazed at the number of suggestions for cracking black walnuts I received! They ranged from the “hammer and brick” method to using long-handled pump pliers to squeezing with a carpenter’s vise. Most noted that a nut pick or a sharp nail was essential for excavating the nutmeats. Some callers mentioned putting the unhusked nuts in a burlap bag and driving over it with a car before beginning the cracking operation; one man said he used stones in a cement mixer to remove the walnut husks. I used a cast iron corn sheller when I was younger to remove the green, crusty husks.

Garage inventors have come up with myriad devices to crack walnuts. Soaking the nuts in hot water for several hours helps keep the kernels from cracking when you shatter the shell. Look online for the Potter Walnut Cracker, one of the oldest tools. Lehman’s Non-Electric Catalog (www.lehmans.com) lists a lever cracker that is said to be effective on almost all nuts. Red Hill General Store (www.redhillgeneralstore.com) sells a cracker that looks to be a no-nonsense, vintage, walnut busting machine.

Q: We have a large, old Black Walnut in our backyard. Two years ago, I paid the kids to pick up the nuts and about went broke! Last Fall there were only 3-4 dozen, and after an early frost, the leaves dropped suddenly — they were covered with small black spots. This Spring, it seemed to leaf out later than other trees in the yard. How can I determine if the tree is healthy? And if it isn’t, what do I do (if anything) to improve it’s health?

A: Walnuts and pecans are famous for bearing heavily in alternate years. If the weather is good this year, it may bear well again.