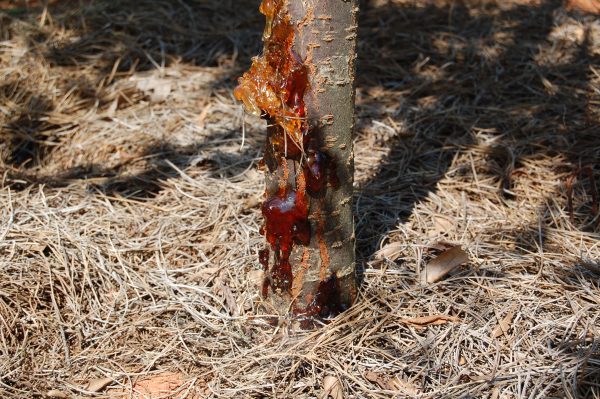 In the world of humans, bleeding is a serious and troubling thing. If something causes us to bleed we immediately take action because we understand that the loss of excessive amounts of blood can cause us great harm. Therefore, it’s really not too surprising to see a somewhat similar reaction when a person believes one of their beloved trees is in immediate danger because it’s bleeding.

Of course we, meaning those of us smart in the way of plants, know that the loss of sap from a tree is not the same as the loss of blood from an animal. Nevertheless, the bleeding of a tree is still not normal, and while we can assure the client that the bleeding itself will not necessarily harm the tree, there is still the cause of the bleeding to find. One of the trees that frequently displays bleeding symptoms and invokes fear in the tree owner is the flowering cherry.

The horticultural myth with bleeding cherries is that it is always an indication of an infestation of borers. If someone notices gum or some other exudate coming out of the trunk of a cherry tree the immediate diagnosis is peachtree borer. This is not entirely incorrect since there is such a thing as a peachtree borer, and cherry trees are the primary host plant, and one of the symptoms of infestation is gobs of gum leaking from the tree.

What if the gum is leaking out higher up on the trunk and there is no sign of any frass? Remember, the gum and bleeding is a result of a break in the bark of the tree and, there are a lot of different things that can break through the bark. Junior practicing with dad’s new hatchet can make a nice break in the bark of the family’s flowering cherry tree and this injury will result in gum exuding from the tree.

The exuding of gum from plants in the genus Prunus, including the cherries, is so common it has been given the name gummosis. The name gummosis does not define a cause, only a response. We have seenhow peachtree borer injury and simple mechanical injury can result in gummosis. There are also several infectious diseases that can result in gummosis. There are three groups of organisms that can cause cankers on cherries and result in a gummosis response. One is a bacteria in the genus Pseudomonas which causes a disease known as bacterial canker. Another is a fungus in the genus Leucostoma (Cytospora) that causes Leucostoma canker of Prunus. The third is usually called fungal gummosis and is caused by the fungus Botryosphaeria dothidea. It is not important in a practical sense to identify the specific organisms involved but, it is important from a diagnostic point of view to differentiate between insect infestation, mechanical injury, and infectious disease. In all three of the diseases listed above, the key diagnostic feature is the canker.

A canker is a necrotic (dead), often sunken lesion on a stem, branch, or twig of a plant. In the case of gum bleeding from the trunk of a cherry tree, a canker can be identified by the death of tissue immediately beneath and surrounding the point of gummosis. If you carefully scrape away the gum and probe the bark beneath, you will find the bark loose and the tissue beneath discolored. In fact, the bark at the point of gummosis may slough off easily indicating dead tissue.

In most cases where a canker and its causal disease is concerned the infected tree is, or has been, under some type of environmental stress. This can be a weak root system due to poor soil conditions or drought stress. Cherry trees stress easily compared to many other landscape trees and this opens the door to an invasion of one of the cankers causing diseases and the resulting gum bleeding.

The next time you are called out to examine a bleeding cherry don’t be swayed by the horticultural myth that’s it’s always a sign of borer infestation. Look more closely and be savvy enough to separate out bug from disease from Junior with his little hatchet. 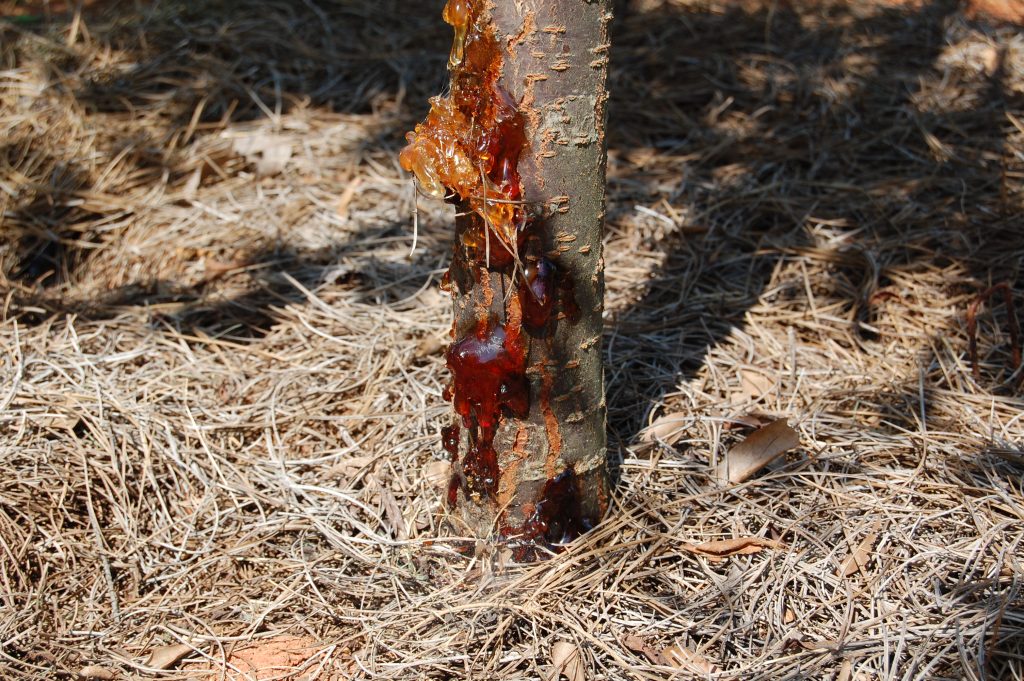