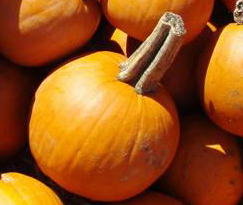 Pumpkins are much-loved decorations for the fall, but many people grow these warm-season vine crops for their flavorful flesh and for their seeds too. Actually, pumpkins are winter squashes, picked when they are fully colored and mature.

The classification of the many varieties is thoroughly mixed up with 4 species represented. Varieties can have 2 or more species in their parentage; thus, it cannot be said that certain pumpkins are 1 species. As is the case for most vine crops, pumpkins can take a lot of room, which may cause some gardeners with restricted space to avoid growing them. In recent years, however, bush types have been developed that require much less space and can be grown in pots.

WHEN TO PLANT
There is no need to get pumpkins into the garden very early. They need warm weather to develop and may rot off if the weather is cool and wet. Sow seeds indoors under lights 1 month before the frost-free date (average date of last frost). Set out started plants or sow seeds directly in the garden after any danger of frost has passed.

WHERE TO PLANT
Pumpkins prefer full sun (8 to 10 hours will suffice), although they will grow and produce in light shade. They need a location with well-drained soil. Expect the pumpkins to make huge vines, so allow them plenty of room to spread. If your garden has restricted space, grow smaller-fruited vining types on supports, or grow bush types in beds or containers.

HOW TO PLANT
Apply a complete garden fertilizer, such as 10-10-10, at a rate of 11/2 pounds per 100 square feet of garden. Spade or rototill the soil. Vine crops do not tolerate root injuries common to transplanting. To alleviate this problem, sow seeds indoors under lights in peat pots that can be planted without disturbing the tiny roots. After danger of frost has passed, sow 6 seeds or carefully set 2 or 3 transplant seedlings in hills about 5 feet apart, with rows 10 feet apart. Or space the plants 10 feet apart down the middle of a bed. Set the plants at the same depth they were growing. Thin the seedlings to 2 or 3 per hill when they are big enough to handle. If there is danger of disturbing the other seedlings, pinch off the extras instead of pulling them. Space bush types, which are well suited for a bed, 3 feet apart down the middle of the bed. Sow or plant dwarf bush types, 1 per container, in a commercial potting mix used in 5-gallon buckets or half barrels. Make sure they drain. Set plants at the same depth that they were growing.

CARE AND MAINTENANCE
After they set fruit, pumpkins need lots of water and fertilizer. Apply 1 inch of water per week when nature does not cooperate. Side-dress with nitrogen at half the normal rate when the vines have almost covered the ground, being careful to rinse with a hose if fertilizer gets on the leaves. Pumpkins produce both male and female flowers on the same plant. Usually, male flowers are produced first. Many gardeners are dismayed when these flowers fall off without making any pumpkins. Female flowers have tiny pumpkins just below the petals; male flowers have straight stems. Bees are necessary for pollination as they carry the pollen from the male flowers to the female flowers while they feed. Pests may affect the plantings, requiring application of insecticides. Apply these products carefully in the evening-sometime after the sun sets but before it is too dark to see-to avoid harming the bees. All squashes are susceptible to attack by squash vine borers, which are the larvae of red beelike moths that lay eggs on the bases of the plants. The eggs hatch into grubs that burrow into the vines, turning them to frass and eventually killing them. Control these insects by applying an approved garden insecticide to the stems of the plants every 2 weeks during the season. Start when the plants begin to vine. If stems have been invaded, try to save them by slitting them lengthwise (where the damage is evident) to kill the grubs inside. Then bury the damaged stem so it can form new roots. Control cucumber beetles and squash bugs with an approved garden insecticide.

ADDITIONAL INFORMATION
Harvest pumpkins when they have developed full color (no green on them). Cut the handles 3 to 4 inches long using a pair of shears to avoid breaking them. Pumpkins without handles do not keep well. Wear gloves during the harvest because the stems may have sharp spines on them. Keep the pumpkins in a warm place (about 80 degrees fahrenheit if possible) after harvest to harden them off, then store them in a cool, dry place. Well-grown pumpkins, those that are fully ripe and have no diseases or insect damage, can be stored all winter. Growing giant pumpkins is an art in itself. Most growers select seed from their biggest pumpkins, start the seed indoors very early, and set out the plants after the soil is warm. Some growers set a temporary greenhouse over the pumpkin patch to keep it as warm as possible. Secret methods are used as well, but since they’re secret, well, how can i describe them? It is known that some gardeners manure the plants heavily, some set up heat lamps, and most limit the hills to 1 plant every 150 square feet. When a pumpkin is set (at least 1 flower has started developing into a pumpkin), growers remove all the other flowers on that vine. They water, fertilize, and pamper the vine to get the biggest pumpkin possible. When the day for the weigh-in arrives, the pumpkins are loaded with forklifts for the trip to the site. Both ripe and immature pumpkins are eligible. The orange ones are considered pumpkins; the green ones are squashes.

VARIETIES
Cushaws are ‘Green-Striped Cushaw’ and ‘White Cushaw’, which are usually used for pies and custard. Jack-o’-lantern-sized pumpkins weigh from 6 to 10 pounds. They are just right for carving, but can be used for cooking too. Jumbo pumpkins are grown strictly for their size. The Biggest Pumpkin weigh-in each year features these giants, some years approaching 1000 pounds for the largest. Large-sized pumpkins weigh up to 25 pounds and are used almost exclusively for carving. These types require about 100 days from planting to harvest. Miniatures are used for decorations and sometimes painted. Naked seeded varieties have seeds without the tough skin and need no hulling before roasting and eating. Pie pumpkins weigh about 5 pounds and are used for cooking and carving; 1 pumpkin is the right size for 1 pie. Commercial canning pumpkins don’t look like the picture on the can. They are referred to as processing pumpkins and are buckskin-colored and shaped like watermelons; they require 110 days to maturity. They include ‘Buckskin’; ‘Dickinson Field’; and ‘Kentucky Field’. For all practical purposes, these are the same, so grow the variety for which you can get seed. The varieties of white painting pumpkins have white skin suitable for painting.

Atlantic Giant
110-140 days
Most winners from this variety.

Prizewinner
110-140 days
Not the biggest, but best looking.