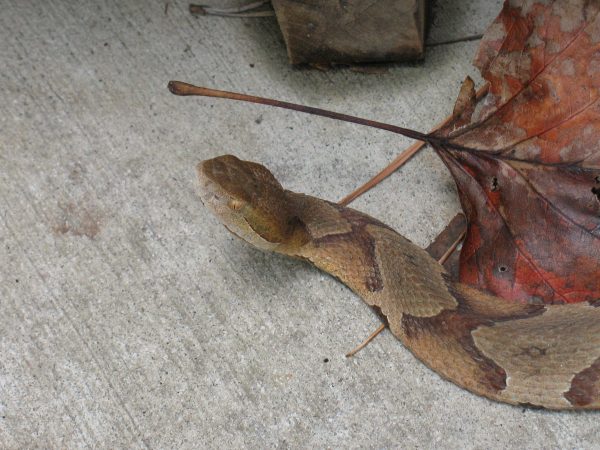 Q: Can you help us identify this snake that showed up in our driveway? What should we do next?

“These are some of the best pix of a snake I have received – most people are scared to death and can’t think straight enough to focus! This is a Southern copperhead snake, Agkistrodon contortrix sub. contortrix.

It is a bit north for the southern copperhead which is endemic to the lower Piedmont and coastal plains. I possibly could be an inter-grade hybrid between the Northern Copperhead Agkistrodon contortix sub. mokasen.

Notice the vivid triangles on their sides from above. These snakes can or may have an hour glass/bow tie pattern but not always. The very most important IDing Characteristic is the vertical pupils during daylight hours as the closeup shows clearly.

Every copperhead and timber or canebrake and pygmy rattler I have seen has the two black dots on the top of their heads and just rear of their eyes which the pic shows as well. Also they commonly lie flat and cock their head at the 45 degree angle as the pix show. This a “watch and alert” position not aggressive position. They only become defensive when threatened..

Few people die from a copperhead bite but losing a some flesh is common and is very painful for 12 hours or more. Trust me from personal experience: no drug dulls the pain sufficiently.

I consider them a plus in the landscape. As long as one pays attention there should never be a problem.

That said, here are my suggestions:

NEVER PICK ONE UP WITH YOUR HANDS!!!!!!!!!! If you need to relocate it always us a sturdy stick or tool THAT IS LONGER THAN THE SNAKE and NEVER TILT IT UP WHILE LIFTING THE SNAKE AS THEY OFTEN WILL SLIDE DOWN TO YOUR HAND. That is not good. Lay a larger container, like a 30gallon garbage can, down near the snake, open end towards its head, with out alerting or frightening the snake. Then, with a LONG stick or tool, very gently guide him into the container. You do not want to make him mad by hitting the ground nearby because a defensive animal of any type is much more dangerous to work with.

To repel a snake, use your garden hose to spray the unwanted snake with water. He will move when the water hits him. He may not go in the direction you want at first contact. Keep spraying him to guide to go where you want him to go and he will leave the area. This is the safest way to deal with a venomous snake because you are positioned far away with the hose so that you are not within striking range and the water will not injure the snake – just make him relocate.

Foot note: NEVER GRAB A SNAKE BY THE BODY AND ESPECIALLY THE HEAD/NECK REGION. This is the dumbest way to make him mad and get bit. The highest concentration of snake bites are from irritated or injured snakes.”

Snakes and Their Control