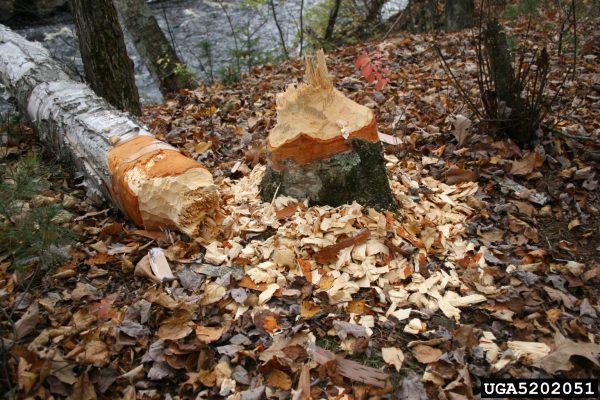 Q: I have a huge body of water behind my home from a beaver dam on Nancy Creek. I can bust up the dam and they start right away to rebuild it. We are very concerned about West Nile Virus having a breeding ground in our neighborhood.

A: Beavers are becoming more and more common in the Atlanta suburbs. They gnaw on tree trunks both for food and to use the trees for their dams. Young adults which were born this spring are dispersing from their home territories right now and setting up new dams.

The best beaver repellent is to simply wrap tree trunks with one-half inch mesh hardware cloth. You can purchase a thirty-six inch high roll from a hardware store. Loosely surround each tree trunk with a couple of layers of wire and secure the ends so they won’t come undone.

You can also try breaching the beaver dam and laying several four inch diameter slotted drain pipes at the bottom, perpendicular to the length of the dam. The animals will find it difficult to plug all of the holes in the pipe and might abandon the dam as the pond level falls. They will, however, try to build another one nearby on the stream.

If the problem is severe, you can hire a nuisance animal trapper to remove the beavers permanently.
—————————-
Walter,
Your advice on beavers is good and correct, but incomplete. I live in a subdivision in NE Cobb. We have two lakes, 10 and 20 acres each fed by various creeks and streams, We have beaver problems and are researching extensively with other folks.

Our efforts are complicated by strong polarized opinions to leave alone vs to trap. We cannot do nothing as they are eating left and right on trees, shrubs, and even ground cover.

By the way, we have no beaver built dams. Most of the time, we’re told, these ‘urbanized” beavers are boring into the side of a bank, typically under a large tree, for their lodge. You usually can find an air hole to locate their lodge.

You can trap and drown underwater a number of ways. This can lure and kill other animals such as otter. However, you can also trap above ground and not kill them by the actual trap, like a have-a-heart squirrel trap. The cost is about twice as much, but you can release anyone you unintentionally catch.

Now for the beavers you catch. You can have them killed and disposed of by the trapper. You can also have them removed and released. However, you can not legally release on public lands and can only release on private property with permission of the owner. Not something that most owners would allow. Why don’t you ask your audience for a volunteer landowner to give us a call so we can have a “win-win” and trap and move our beavers to another diner?

Protection works as you suggest, but is problematical in a heavily wooded and shrubed community like ours. It’s more of a deterrent to use on your most valuable trees and shrubs . Being they aren’t stupid enough to starve, they climb further up the banks or over to the neighbors to eat.