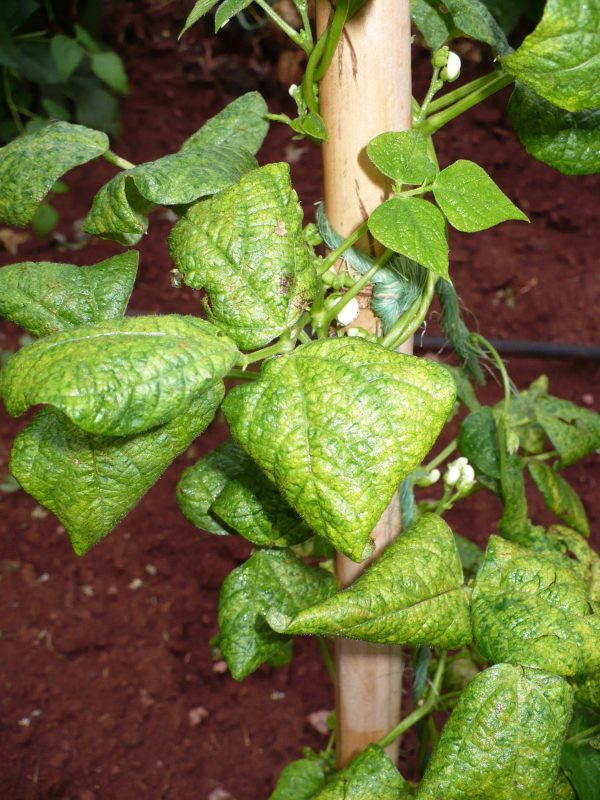 When kudzu bugs first appeared in 2009, crop scientists predicted they would eventually become a problem….. but they weren’t sure where or how.

One gardener sent me pictures of her damaged beans which were covered with kudzu bugs. I initially diagnosed this as kudzu bug damage, but Dr. Wayne Gardner, who leads the effort in Georgia to understand this pest says

“Our increasing experience with this insect clearly tells us that the damage pictured in those images is NOT kudzu bug damage.  In fact, the damage looks far more like some virus, especially with the seedling or smaller plant.  These insects feed not on the foliage so much, but rather on stems and leaf veins where they insert their beaks into plant vascular tissues to remove nutrients.  Damage usually manifests itself in reduced bean size, maybe even some aborted pods.  There is no mottling type damage of the foliage.  Plants are not outright killed.

“Yes, we see adults gathering on plants as you have seen in home gardens and landscapes.  They are apparently feeding on stems and leaf veins.  If egg masses are deposited on these plants, none of the nymphs that may hatch from those few egg masses survive.  Continuing host preference testing underscores that the only plants that support nymphal development are kudzu and soybeans.  We have observed relatively few nymphs on wisteria and even on pigeon pea.  UGA’s Dr.Stormy Sparks has observed nymphs in Fordhook limas produced in commercial fields, but we have not been able to replicate that in greenhouse and field studies of host preference.”