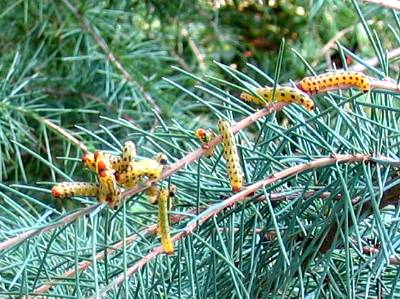 Q: I just noticed that one of my deodar cedars is suddenly and rapidly becoming a skeleton.

Upon closer inspection, I found it is being eaten alive by clusters of spotted yellow caterpillars with bright red lips! I would say they were beautiful if they weren’t so damaging.

They really must die. How should I kill them?

A: They aren’t caterpillars. They are red-headed pine sawfly larvae. The sawfly is a wasp-like insect.

Since they are not caterpillars, products containing Bacillus thuringiensis won’t kill them. Spray the trees with any garden insecticide instead.

Your biggest problem though is the damage already done to the tree. Deodar cedar doesn’t resprout readily after needles are eaten. You’ll just have to wait until next spring to see if it recovers.