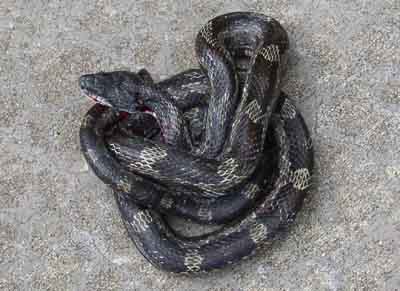 Q: In the last week, three rat snakes got caught in bird netting over a raised bed. We tried to untangle but they were deceased. What should we do to prevent this?

A: You can’t simply raise the netting because birds will be able to bypass your garden defense. I think the easiest thing to do is spread a wide layer of mini-size pine chip mulch around your garden. Snakes don’t like to be exposed as they would be crawling in the open over the mulch. I specify mini chips because crickets, lizards, and toads are unlikely to live there and attract hungry snakes. If a snake gets into the netting again, use blunt-tipped bandage scissors (surgical scissors) to slide between the snake’s skin and the netting while a helper holds the snake still.