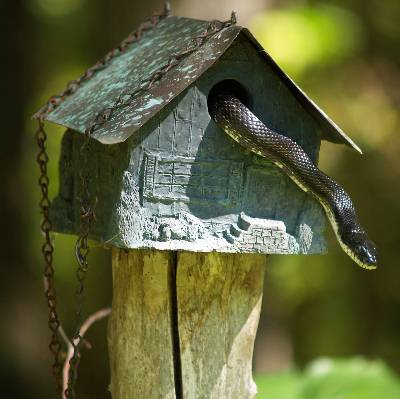 Q: I can see a birdhouse from my kitchen window and thought I had a leaf hanging out of it. Then I noticed a squirrel raising cane near it and saw that the leaf was getting longer. It was a snake!

When we first got close to the house he pulled back in and wouldn’t come back out. Late that evening we put a cork in the hole to keep him in because I was determined to get pictures.

I named him Golith because if that cork was out the next morning I was going to have great respect for him.

I had a titmouse nest in that house last spring. The babies never left the nest and now I know why. Are we right that he is a black rat snake? He was easily five feet long.

My mother once found one trying to escape her chicken pen. Unfortunately, the egg it had recently swallowed kept it from squeezing back out through the chicken wire. Although the creature is generally considered beneficial, she declined to allow it a further diet of the source of her pin money.

You can protect your titmice by wrapping a wide band of sheet metal around the post next spring.

Don’t forget that all non-venomous snakes in Georgia are protected by law.

The Savannah River Ecology Laboratory has an excellent website devoted to identifying snakes, frogs and other amphibians here.