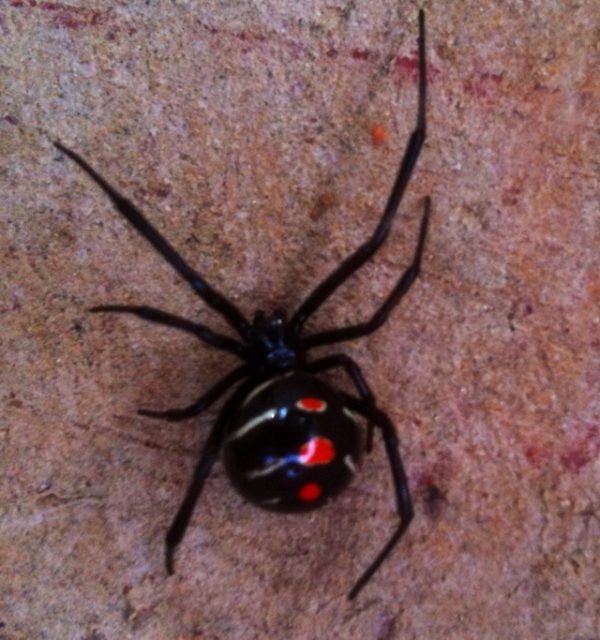 Q: I recently found a black widow spider in my bathroom. Where did it come from? Do they nest in the attic or basement?

A: Poisonous spiders populate the nightmares of many people. The combination of eight legs, venomous jaws and the image of being caught in a sticky web is sure to produce a shudder in most. Although all spiders have jaws and venom glands, only a couple have venom that is toxic to humans. The black widow is most feared but the brown recluse spider is most likely to be encountered in a home.

The female black widow is about one-half inch long, excluding her legs. Most people know that the female has a shiny black body with a red hourglass mark on her abdomen. In the out-of-doors, black widows might be found in rock piles, rotten stumps or piles of firewood. Though rare indoors, they might hide under furniture or appliances. A black widow is timid and will only bite in response to being injured. I don’t know why you found one in your bathroom but it is not likely that you will find another.

The brown recluse spider is much more at home in your home. The female is a bit less than one-half inch long, excluding her legs. Again, most folks remember that the brown recluse’ body is light brown and has a dark fiddle underneath. Brown recluse spiders are usually found in stacks of paper, behind picture frames and in little-used cabinets.

Now that you know what to look for, what can you do about venomous spiders? In two words: not much. Wear gloves when moving firewood or rocks and when cleaning out stacks of old paper and boxes. Insect sprays are limited in their usefulness. Sure, the poison will kill a spider. The problem is finding the spider in order to spray it. Click here for spider insecticide products.

Keep your eyes peeled: the Georgia Poison Control Center says that 423 people were bitten by poisonous spiders in Georgia in 1998.

Causes of Necrotic Wounds other than Brown Recluse Spider Bites