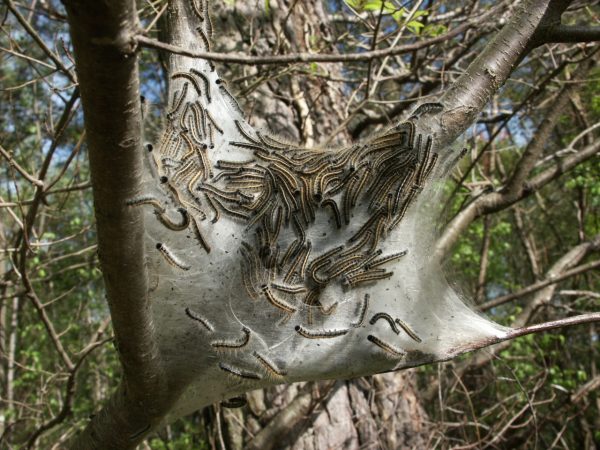 Please do not read if you are about to dine!

Some people react with a grimace and “Yuck!” Others are willing to give it a try.

“Either they say they want some or they are completely disgusted and say they would never taste it,” he said.

Reigstad, you see, has made wine out of the dreaded caterpillars commonly called army worms.

For many Northland residents, just the thought of such a wine conjures up memories of millions of hairy, squishy, dark green caterpillars defoliating trees and bushes. And memories of masses of army worms crawling up the sides of houses, marching down sidewalks and parachuting from trees.

But in the crawly creatures, Reigstad saw potential.

After months of straining, fermenting and aging his brew in the basement of his Lakeside home, his 11-gallon batch of army worm wine is ready.

“It’s a white wine; I’d say it would go really good with walleye or any seafood, but especially a freshwater fish,” Reigstad said.

Four local wine connoisseurs invited to taste the wine described it as dry, pale and crisp. They compared it to a pinot grigio or white bordeaux.

“I was surprised how similar it tastes to grape wine, said Derek Mahle, the Duluth area distributor for Quality Wine & Spirits in Bloomington, Minn.

“If I was looking for a wine made from larvae, I’d choose this,” quipped Andrew Swanson of Fitger’s Wine Cellars in Duluth.

Reigstad, 36, is no novice when it comes to winemaking. Serious about his hobby, he’s been making wine for 13 years.

Reigstad started making wine with his grandmother who lived in southern Minnesota. They used rhubarb and grapes from her gardens. When she died two years ago, he continued the tradition in his own home.

Besides the usual grape wines, Reigstad has made wine with grapefruit, dandelions, rhubarb, strawberries, bananas, plums, blackberries and lilac blossoms.

Reigstad got the idea for army worm wine last year from a co-worker who told him that his grandfather used to make it. That got Reigstad thinking about how it could be done since wine is typically made from a fruit or flower.

“Army worms eat leaves,” he reasoned. “So essentially they’re a combination of fruit and flowers.”

For blueberry wine, Reigstad uses two pounds of blueberries per gallon. For dandelion wine, he uses six cups of dandelions per gallon. Because of their density, he figured 1 pounds of worms per gallon would do it.

“I had no idea what this was going to taste like,” he said. “I seriously didn’t know how it would turn out.”

Reigstad and his girlfriend began by gathering forest tent caterpillars in the Fish Lake area in mid-June. They waited until the end of the caterpillars’ feasting cycle when they were big. Using a whisk broom, they swept masses of worms from tree limbs into clean 6-gallon plastic buckets. When they had about seven pounds of worms in each bucket, Reigstad poured boiling water on them, killing them instantly.

After removing debris that surfaced, Reigstad mashed the army worms up a bit. He added sugar, campden tablets, yeast and other ingredients before covering the bucket and leaving it to ferment.

“It starts bubbling and smelling like rotting fruit,” he said, explaining that that’s normal.

At the end of a week, Reigstad scooped out the caterpillars with a kitchen strainer and threw them away.

“Hold the strainer up and let it drip out to get the full army worm flavor,” he advised anyone planning to replicate his wine.

The wine — which was a green liquid at this point — was strained and funneled into 5-gallon glass jugs called carboys, fitted with air-lock caps. The jugs were left to ferment for three months, during which time they were periodically strained. While most wines need to be siphoned to a clean jug four or five times to clear sediment, Reigstad only had to do it twice with army worm wine.

“This army worm wine cleared real fast, like apple wine,” he said. “The clarity surprised me.”

After 4 months, the wine is ready to drink.

“It’s good,” Reigstad said. “For my taste, it’s on the sweet end. It tastes a little bit like rhubarb wine. My grandmother and I used to make that.”

Making army worm wine didn’t come without its mishaps. During fermentation, one jug’s cap blew off and shot wine all over Reigstad’s basement.

“It was a mess,” Reigstad recalled. “My brother said it was the army worms’ revenge.”

His 11 gallons will yield about 70 25-ounce bottles of wine, which he plans to give as Christmas presents.

Some lucky folks will get a bonus. Reigstad saved and froze 30 large army worms to put in bottles, similar to the worms put in some tequila bottles.

Who will get those bottles?

“Very special people,” Reigstad said. “Not necessarily people I like, but they’ll be special in their own way.”