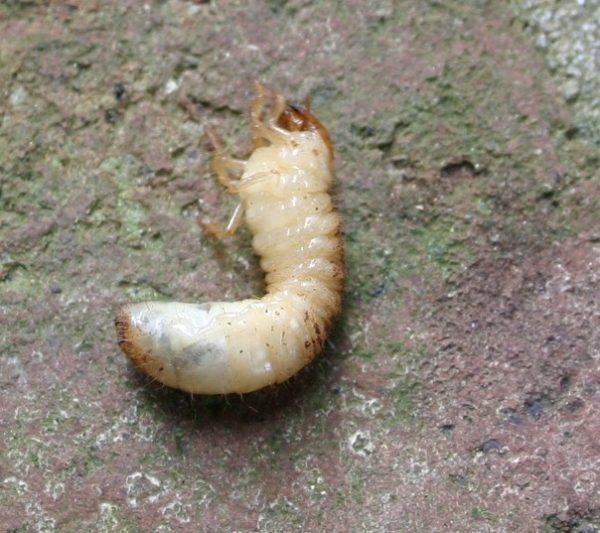 It’s common to find one or two “C-shaped” white grubs when you dig the soil in spring and early summer. A grub is the immature form of a beetle. Some grubs develop into Japanese beetles, some turn into the brown beetles that swarm around porch lights at night. Usually the biggest grubs you’ll find (the size of your little finger) are those of the green June beetle, which generations of kids flew at the end of a thread.

Though the white grubs consume plant roots in spring, it’s not time to hit the garden panic button if you find just a few. Professionals don’t even consider treating until they discover eight grubs per square foot. If your lawn is home to scattered grubs, most will die or the damage they cause will be small enough to ignore. Even if you had lots of Japanese beetles feasting on your roses last year, keep in mind that killing those on your property won’t prevent them from flying in from your neighbor’s lawn.

Diagnosing grub problems can’t be done by looking at your lawn…you have to look under the grass. To check for grubs, use a flat-bladed shovel to scoop an inch under a section of soil. Lightly scatter the dirt under your shovel and under the grass piece. If you see few grubs, they are not the problem.

The most effective season to kill beetle grubs is in early fall. This is after the females have laid their eggs, which are right at the soil surface. The most difficult time is in summer, after adults have hatched.

,
are typically used for control but some gardeners have tried spreading milky spore grub control (click for sources)

Whatever you try, remember that Japanese beetles can fly from your neighbors’ lawns to your yard. Unless EVERYONE uses a grub control, little benefit is gained.

Japanese Beetles in the Urban Landscape