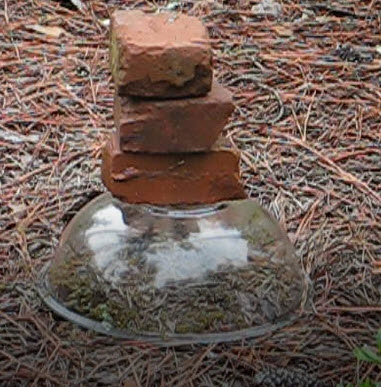 Yellow jackets can be a real pest in late summer and fall. They swarm out of the nest at the slightest provocation, looking to punish whomever disturbed them.

Want to know what works to kill a nest? We do too!

If you have ever used an inverted glass bowl to eliminate a yellow jacket nest email Dr. Paul Guillebeau and tell him how it worked for you. We need more information before we can recommend this nonchemical solution, but there is some evidence that it works.

Paul has used this method twice in his own yard. Both times, it eliminated the nest within 4-5 days. He also talked a colleague into trying it. She kept the bowl over the nest entrance for about two weeks just to be sure. After digging up the nest after a fortnight, she reported the wasps were all dead. Other sources have also suggested that this strategy works. However, we do not have enough information to recommend it to everyone.

We do not know why this method works. It seems unlikely that the temperature would increase enough under the ground to kill the yellow jackets. Our hypothesis is that the nest runs out of food and/or water very quickly.

Here is the method in case you want to try it.

1. Observe the nest from a distance to determine exactly where the entrance hole is. The nest may have more than one entrance, but yellow jackets do not create a second escape hatch.

The queens establish a nest wherever they find a suitable existing hole; perhaps a root rotted away or a rodent abandoned a nest.

2. Place a clear bowl(s) over the entrance(s). To reduce the chances of a sting, place the bowl either very early in the morning or at dusk when the wasps are not active. We do not advise doing it at night with a flashlight; the wasps may be attracted to the light and you.

4. Observe the bowl during the day for a few days. If the wasps are escaping around the edge of the bowl, seal any gaps with loose dirt or sand.

5. Please report to us the success or failure of the project.

Comment #1 I am reporting back from out radio conversation 2 weeks ago and I have completed the homework you gave me for my yellowjacket ground nests. Well I found more than one entry and I used every clear glass piece of cookware I had in the kitchen to cover the ground holes! After one week there was no activity around the sites, both inside attempting to leave nor did I see scouts circling above the nest. So glad your theory worked and there were no chemicals needed to be put into the ground. I DID learn that I should have placed the cookware onto the open holes nearer to dusk rather than the late afternoon as I made a couple of scouts mad and I suffered their wrath with a sting or two! That is just a small price to pay for a success! I think I deserve an ‘A’ for my homework. Susan from Lilburn

Comment #2 I heard/read your idea that a glass bowl inverted over a yellow jacket’s nest could possibly kill the colony. Um no.

While it may work in a grassy or dirt area, it will not work on pinestraw. My sweet husband went out just before dark on Monday, and put our sturdiest Pyrex bowl over the hole. To ensure a good seal, he placed three bricks on top – really squooshing the bowl to the ground. Since that ground is a pine island, the yellow jackets have found their way through the pinestraw. Most still try to fly through the glass, but many, many of those evil-doers have found their way in and out.

Attached is a short video. It is amazing. They are really miffed! But now I won’t be able to use that bowl until winter sets in. No fried chicken for us. 🙁
Robin in Tucker

I am E-Mailing you to inform you of my recent complete success in eliminating a yellow jacket ground nest using an inverted glass bowl here in upstate South Carolina.

After confirming only one nest entry / exit point, placing the bowl shortly after dark was a simple matter.  Within a few days, most were dead and piled up around the inner rim of the bowl.  There had to be hundreds.  I may actually count them in a few more days.  The nest was located near the door to my storage shed where I keep my lawnmower and other yard tools.  I had just mowed a few days prior, before even noticing the now well-established nest, and was quite thankful to not have been stung in the process.  The nest was in an area of thick centipede grass on level ground, which combined with a good seal and a brick top weight seemed to be all that was required.  I did not pile any dirt around the outer rim.I only ever saw at maximum 5 or 6 wasps outside of the glass bowl after placement, and they were attempting to get in.  I never saw any evidence of successful attempts to get out.  My guess is that those outside the bowl were either stragglers that had not yet returned from foraging at the time the bowl was placed (despite it being after dark), or possibly male reproductives from another hive looking to mate with newly-emerged queens?  They’ve also given up or died off themselves after hanging around for a few days.Do you have any insight into what actually kills the wasps when this method is used successfully?  They certainly expended a lot of energy flying against the glass, and in the late afternoon, the focused sun likely heated the above-ground air under the bowl fairly significantly.  But food and water would have also been tough to come by in there.  I now also know the source of the mysterious small red clay dirt balls I’d noticed on my back porch, steps, and driveway in recent weeks!How long should I continue to leave the bowl after visible activity ceases?  My only concern at this point is unhatched larvae emerging as new adults (and especially as reproductives) if I remove the bowl too soon.  I don’t want to give rise to next year’s nests.  Do the larvae die pretty quickly without adults to feed them?  This is the first noted nest on my property in 15 years of living here, but last year a family friend tragically died from an anaphylactic reaction to a yellow jacket sting, so I certainly prefer to play it safe.Thanks for the suggestion!  It was great to be able to eliminate the nest without any pesticides, without setting myself on fire, and with minimal risk of being stung.David C.

Dr. Guillebeau replies: From talking with a colleague, I am convinced that colony dies from a lack of food and water. He told me that yellow jackets do not have a store of food like honeybees. The larvae will die quickly with no one to feed them. Additionally, the female pupae will not have mated yet. Since it is getting cold, I would take the bowl off now with no qualms. There are a lot of research questions here. E.g., Does it have to be a clear bowl? Would something smaller like a soup can work? However, it is not easy to find enough nests to work on. For now, I am relying on the responses of people around the country. I know this strategy works and almost have enough data to publish.