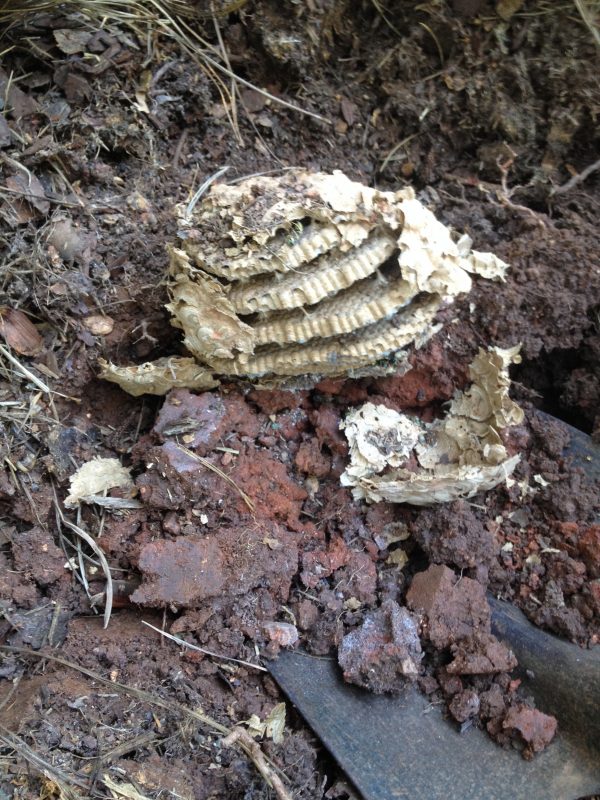 Yellowjackets are a common, yet misunderstood, insect of the South. Most folks only know about their attack behavior when a nest is disturbed. UGA Wasp expert Dr. Bob Matthews sheds some light on their other behaviors:

“Eastern yellowjackets,Vespula maculifrons may be seen hovering over lawns in late July. This is more of a slow, searching flight characteristic of worker yellowjackets in which several individuals will be regularly seen to slowly traverse an area of lawn or shrubbery, perhaps looking for prey items. If many are seen in July there is a large population nearby. The bad news is that unless one can locate and destroy the nest(s) the situation is going to get worse until well into October since populations are still increasing almost exponentially.

‘Yellowjackets in mid-summer are attracted to things like meat, bacon or tuna. This reflects a colony need for protein to feed the huge crop of brood developing in the nest. The wasps are scavengers, which is why they become an increasing problem at picnics and backyard BBQ’s. Basically “our” food is easier to find and more plentiful than the flies, caterpillars, etc. that form their main protein source otherwise. These were adequate earlier in the season when the number of developing brood was relatively low.

“Sweets like honey and soft drinks will become more attractive later in September and October when most of the brood rearing is done. Sugar is a carbohydrate and it is needed by the adult insects to fuel their flight and foraging. It appears from my work that in late fall they get most of their carbohydrates from honeydew excreted by sap-feeding insects (e.g., aphids). Increasingly they will visit trash bins for the sweet leftovers in fast food cups and soda cans. They are a huge nuisance, at recreation parks and campgrounds, etc.”