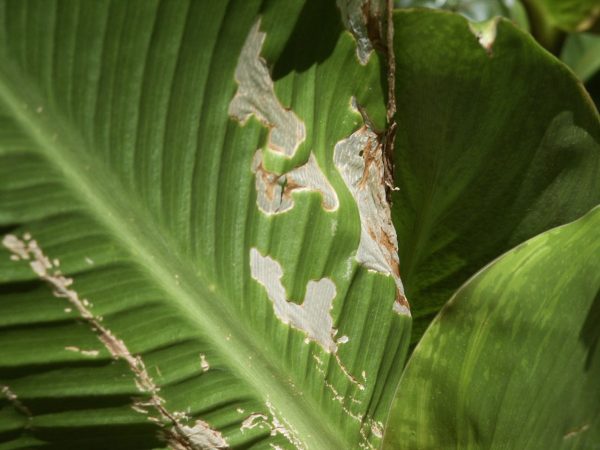 Q: I have cannas that have large red flowers in summer. There are bugs that live in the leaves and secrete a substance that sticks the leaves together, thus preventing them from opening properly as they grow. Any idea what it might be and how to get rid of them?

A: You have canna leaf rollers, specifically the lesser canna leaf roller. The creatures you see are the larvae of a moth that lays her eggs on the canna leaves. When the pests hatch, they stitch the edges of the young leaves together, making a perfect hiding place. Keep an eye on the leaves as they unfurl and pull them apart.

If you find the grub inside, flip it onto a surface nearby where a bird can get a snack. If you have too many plants to watch individually, spray the interior of the leaves as they unroll with Bacillus thuringiensis (click for sources).

Make a note to remove all foliage after the first frost this fall since the last generation of the leaf roller overwinters in the dead leaves.

“I heard you say this winter to a radio caller that you thought that Bayer Advanced Tree and Shrub Insect Control could possibly control canna leaf roller.

“I offer proof that it can.

“I attend meetings at a building that has a little plot of cannas. Last year they were just all eat up with leaf rollers. Every week I’d be there early just to unstitch the leaves and expose the bugs inside. They didn’t clean out nor renew the mulch as you also suggest in helping control the little buggers.

“So about the first to middle of March, before the cannas had started to poke their heads up, I treated the area with the Bayer Advanced Tree and Shrub Insect Control.

“It’s been interesting to watch as the cannas emerged that the top of first leafs were severely eaten away. But after that, all subsequent leaves have been healthy and fully deployed. I guess something the critters ate didn’t agree with them.

I personally followed Patrick’s chemical advice on a canna bed this year. His observance that the leaves looked good at first was true for me. But as the summer wore on, leaf rollers attacked.

In a recent conversation with Patrick, he said the same had happened to him.

BUT MAYBE SOME GOOD NEWS

Twenty-two cultivars of canna lilies, Canna x generalis, were evaluated for potential resistance to the lesser canna lily leafroller, Geshna cannalis, and the Japanese beetle, Popillia japonica. Both of these pests cause defoliation of the plants resulting in reduced plant fitness and aesthetic injury. Cultivars sustaining the most damage by leafrollers were ‘Richard Wallace’, ‘Firebird’, and ‘Black Knight’.  While Japanese beetle injury varied, cultivars most consistently damaged by beetles were ‘Lenape’, ‘Scarlet Wave’, ‘Dawn Pink’, and ‘Crimson Beauty’.  While all plants sustained at least some injury, cultivars that consistently had the least amount of damage by leafrollers were ‘Maudie Malcolm’, ‘Striped Beauty’, and ‘Journey’s End’.  ‘Maudie Malcolm’ and ‘Striped Beauty’ were similarly avoided by Japanese beetles, while ‘Journey’s End’ sustained moderate injury from this pest.  Tall cultivars with red or orange flowers and some red in their foliage were especially vulnerable to infestation by the lesser canna leafroller.

THE BEST THING YOU CAN DO IS TO CLIP STEMS AT GROUND LEVEL AND DESTROY ALL DEBRIS EACH WINTER.