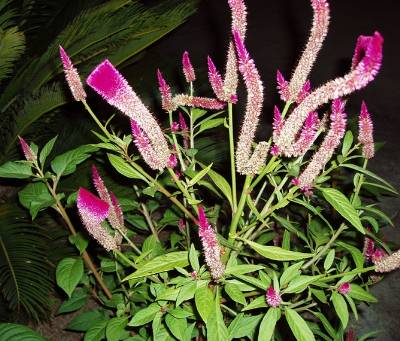 Q: Can you identify this plant? It’s growing in my neighbor’s yard, and I really would like more for my garden. The blooms feel a little fuzzy. I believe the two pictures are of the same variety of plant, but I’m not positive.

A: Like siblings who have the same parents but who look completely different from each other, you’re seeing two kinds of celosia, Celosia argentea. They are distinguished by the shape of their flowers. Spiky-flowered celosia is named, as you could guess, Celosia argentea var. spicata. Celosia that has a flower head like a large crest is named Celosia argentea var. cristata. Some folks compare the flowerhead to a large red brain.

A third celosia, common at any garden center in spring, has a feathery head. It is named Celosia argentea var. plumosa.

All of these celosia are annual flowers but the seed can be collected in fall and planted each spring.