Coppiced Trees – Weak or Not? 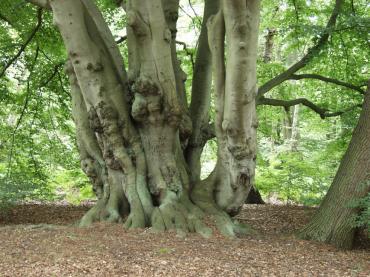 Q: During your radio program you described water sprouts from the base of a ginkgo tree which had apparently perished. Your conversation got me to thinking about a silviculture practice known as coppicing.

Coppicing involves the retention and development of new growth sprouting from the stumps of various tree species, including maple, oak, ash, black cherry, beech and basswood, until they reach merchantable size when they are then harvested. It is widely used in European forest management and to some extent in our country’s northeastern and mid-western states.

Why don’t those trees fall apart?

A: You’ve made a good description and question. Here’s my explanation:

When a tree is coppiced, the resulting sprouts are weakly attached. But as the years go on, if no great stresses are applied, the sprouts’ attachment becomes stronger and stronger.

Much depends on the vigor with which a tree responds to pruning. Sweet chestnut, maple, and beech grow quickly after coppicing and the trunk grows to encompasse the base of new sprouts to give a good anchor point.

In referring to the woman whose ginkgo had resprouted, my experience is that ginkgo does not grow quickly. That’s why I recommended she not select the best sprout to become a new trunk. I think it would be safer for her and her neighbors to have a ginkgo bush rather than a new tree that might fall.