English Ivy – An Essay on Control 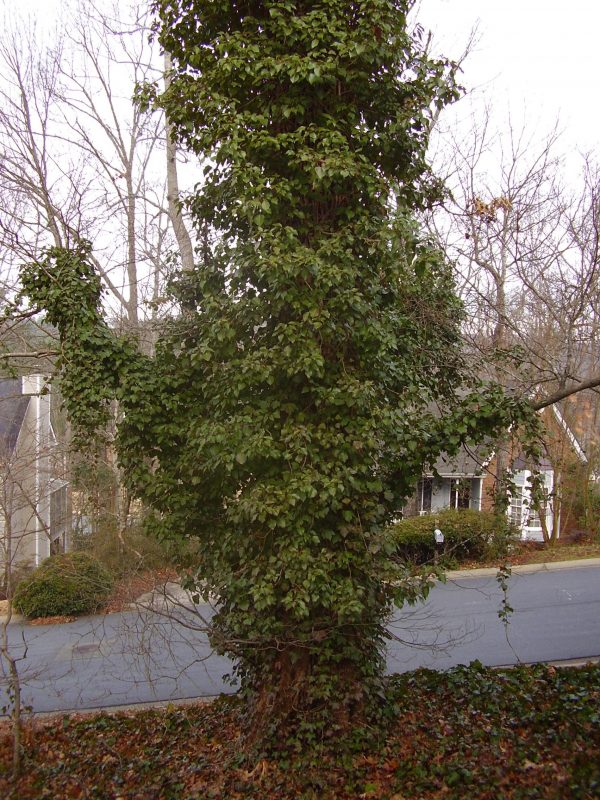 I accompanied my son’s class on an overnight Environmental Education trip to Rock Eagle one year. One of his classmates was a great source of fascination to me.

Whenever I stood next to him he was a model of decorum: well-behaved, intelligent and respectful. When I let him out of my sight he turned into a rascal: throwing milk cartons across the lunch hall, smashing another kid with a soft drink bottle and starting innumerable fights.

The child has great potential but there is an uncontrollable urge for chaos buried deep inside him. I returned from the trip with great respect for the teachers who deal with irascible adolescents for nine months each year.

I was thinking about English ivy in a similar light on our recent Memorial Day weekend. Much of Saturday was spent crouching under hydrangea, aucuba and big native azaleas yanking ivy vine from around their trunks. My neighbor has an untended swath of woodland bordering my back yard and his English ivy has encroached several feet into my landscape over the past couple of years. My ferns, trillium hosta and azaleas have been shrouded by a dense green quilt.

The ivy plant has such potential! It tolerates all but the densest shade, accepts drought with aplomb, has few pests and grows in any soil. Why, when I take my eyes off it for just a little bit, must it become such a rogue?

English ivy has been declared flora non grata in Oregon. Some gardeners consider it a pest on a par with kudzu. It adds weight to overburdened trees and shades lower branches. It suffocates all that it covers, leading some to describe “ivy deserts” in their landscapes. Give it an inch and it takes a yard!

PULL IT OUT
Terry K. turned me on to a great Web site about English ivy removal. The Ivy Removal Project (www.noivyleague.com) is based in Portland, Oregon. Over the past ten years, they have developed several specialized techniques for eradicating ivy. From “Make a Lifesaver” to “Roll it Like a Log”, their approaches are tested and refined by real-life experience.

I’m often asked for tips on the best method to attack English ivy. As you already know from my holiday weekend, manually ripping it out is one of my recommended techniques. It is sweaty and laborious but it is often the only way to proceed when ivy runs close to ornamental plants. It is also surprisingly quick to accomplish since a long length of vine can come out with a single heave.

will kill English ivy but the process is slow. Ivy’s leathery leaves and frequent roots aid in its survival from chemical attack. I use chemicals to maintain a ivy-free swath between my azaleas and another neighbor’s viney plot. Death is not immediate; I spray every six weeks or as needed.

Given a large area between trees, I think an initial mowing would get chemical control off to a good start. Be sure to check for hidden stones, stumps, wire and sinkholes before you push your mower into an ivy sanctuary. When new leaves emerge a few weeks later hit them hard with one of the herbicides mentioned above.

REMOVE FROM TREES
English ivy is not parasitic. It does not suck sap from the tree it ascends. Nonetheless it should never be allowed to climb a tree unchecked. When I find a vine that has grown far above me in a tree, I use a flat prybar to prize the vine from the trunk so I can sever it with my loppers. Not content with a single snip, I usually cut a twelve inch section out of the vine at waist height. This gives me a better view of smaller vines that may be hiding beneath the larger one. After cutting, I immediately spray the lower vine stump with glyphosate (click for sources)

BE PATIENT
Don’t expect anything immediately. In my experience I don’t see damage until two weeks after an application. The leaves get brown spots, turn yellow, and gradually fall off. Also, I notice that if there’s a lot of ivy, the first spraying only kills the top level of leaves. It takes a second spraying to get the lowest level of leaves and vines killed as well.

Like my young grade school acquaintance, English ivy is full of potential and contradictions. With proper care it’s a champion. With neglect it becomes a rampant, rapacious pest. As my teacher friends have proved, patience, perseverance and lots of forethought are essential when faced with barely governable kids …. and plants.