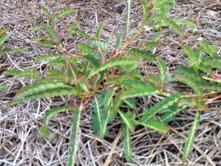 My friend Daryl Pulis and I share a common passion. We enjoy learning more about odd and uncommon plants and sleuthing out practical information about them. When the rare amorphophallus bloomed at the Atlanta Botanical Garden, Daryl posted breathless accounts and digital photos on the Internet daily.

When I saw Daryl recently, she brought me a weed with which she was not familiar. “It grows throughout my garden”, she complained. “It is easy to pull but those little seedlings are invasive as all get out!”

I recognized her weed immediately. I have it all through my garden as well but I’ve never known its name! I’ve just pulled it out and thrown it away by the armload, not suspecting that Daryl and I have been visited by a new, invasive pest. It is so fresh on the landscape scene that has no widely known common name. “That *&^*^$#%# Florida weed!” seems accepted by most professionals. I sent a photo to University of Georgia weed guru Dr. Tim Murphy, who immediately identified it as Mulberry Weed (^Fatuoa villosa^). It has been in the U.S. for less than forty years but it has already infested fifteen states, seemingly spread in nursery containers. It seeds prolifically and is difficult to control without constant effort.

Daryl and I must now decide how to deal with the unwelcome interloper. I’m sure we’ll individually use some combination of the following five strategies to gain the upper hand. In fact, most weeds in your landscape would succumb to these techniques.

PULL IT OUT As I have noted, mulberry weed is easy to pull. The roots do not grow deep and the stem is sturdy enough to bring out an entire plant with a good yank. It’s the strategy I use for privet seedlings and English ivy that encroach on my flower beds. Normally attractive plants like Northern sea oats and four-o’clock become weeds when they send seeds out of their allotted space. Their sprouts meet the same “tug and toss” fate.

KILL IT OUTRIGHT I’m fighting my annual battle with chickweed in my lawn this fall. Since I planted fescue seed just six weeks ago, I don’t want to spray the entire lawn with a herbicide. Instead, I take a weekly walk across the turf and spot-spray each clump of chickweed, wild violet or bittercress I see. Some weed killer chemicals can distinguish between a broadleafed plant (like chickweed or ground ivy) and your lawn grass. I use these “selective weed killers” to keep my lawn as weed-free as possible.

Last week I resorted to a “non-selective weed killer” in my fight against mulberry weed. I dug a last few daylilies from a raised bed infested with the pest and then sprayed the whole thing with RoundUp. According to the label, the weeds will be kaput and I can plant there again in only seven days. Other products, like Finale, KleenUp and NextDay, allow me to hit weeds with my very best shot …. yet plant in the same spot in a short time.

PREVENT IT In April three years ago, I could barely see my pansies under a sprawl of vetch and chickweed. I vowed to begin applying a weed preventer (also called a pre-emergent) to my flower beds after planting each fall. For the last two springs, my pansies have been unblemished! I lightly sprinkle one of the several products labeled for broadleaf weed prevention on the beds after I plant each October. Then I irrigate enough to dissolve the chemical into the soil. The chemical barrier keeps seed from sprouting and I avoid the chore of weeding the flowers each spring.

Most lawn owners know they can prevent many weeds by applying a pre-emergent to their turf in March and in September. If you read the product labels carefully and use the chemicals as directed, you can avoid a world of work by preventing weeds before they come up.

LEAVE IT ALONE Unfortunately, this is the strategy that allowed mulberry weed to spread so extensively. I occasionally leave pokeweed alone because I know how much birds enjoy the fruit. Poison ivy, horsenettle and kudzu, though, get my immediate and deadly attention. Some gardeners take a ^laissez faire^ attitude toward weeds…but they can’t expect any sympathy from me when the weeds become their main crop.

As always, identifying a weed is the first step towards its control. If you are not sure of a plant, take a sample to a local nursery or county Extension office and ask a professional. Now that Daryl and I have identified our new nemesis, we can decide which of the above strategies to use against it.