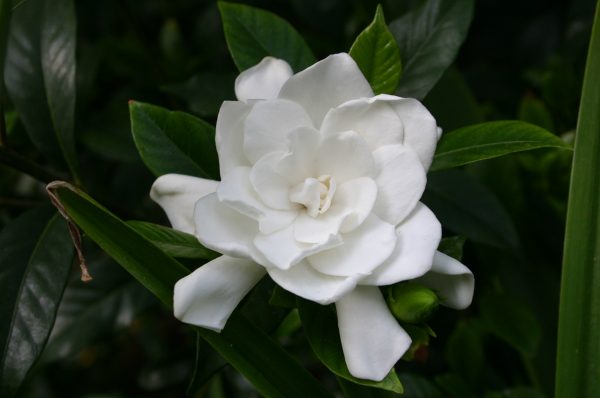 Q: I have some gardenia bushes that are about five feet tall. They are so top heavy that I have to tie them back for them to stand erect. Should I prune back the limbs occasionally to allow the stems to “catch up” with the plant’s vertical growth and strengthen themselves so that they can eventually support the weight of the leaves and flowers? When should I prune so as not to diminish the summer blossoms that my wife loves?

A: Whenever you prune a broadleafed shrub such as gardenia, holly, photinia, etc., keep this mantra in mind: new growth resulting from pruning will occur only a few inches from where the cuts are made. You can’t trim the top of your gardenia and expect the bottom to fill out more densely. It won’t happen. If you want the gardenia to be less spindley, do the pruning in three steps:

First, prune it lightly (removing perhaps one fourth of the foliage)in early fall. The reason you can’t remove more foliage is that severe fall pruning makes a gardenia more likely to suffer cold damage. If temperatures threaten to plunge lower than ten degrees this winter, cover the entire plant for a few days with black plastic sheeting anchored to the ground with stones.

Gardenias bloom in early summer. Some of the flowers are produced on twigs that grew the previous year while others form on twigs that develop after March. The second time to prune is the next year in early March. At that time you can remove much more of the plant and shape it to a lower, more oval form. Try to leave untouched the growth closest to the ground. This will be where your wife’s flowers will blossom.

The third time to prune is just after it blooms. In my opinion, this is the most important pruning you’ll do. Shape it to a size three-quarters of what you’d like it to be for the following winter. Head back many of the limbs, so they will grow dense foliage during the rest of the summer. You can do further corrective pruning, if needed, next year.