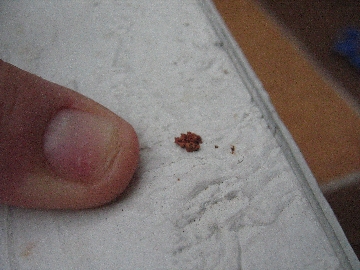 I LOVE IT when science and personal observation prevail!

Initially I theorized that cicada killer wasps were dropping the mysterious dirt balls. They certainly excavate holes in the ground in July!

But when I presented the situation to University of Georgia bee and wasp expert Bob Matthews, he knew the answer:

“The yellowjacket is almost certainly the culprit here.

“First is the time of year. Nests are expanded rapidly and grow almost exponentially during late June through September. To allow for this expansion the original nest hole must be greatly enlarged to accomodate the growing nest that will ultimately be at least soccer ball-sized and often larger.

“After a good rain, excavating activity often approaches a frenzy level, and if you watch the traffic at the nest entrance 7 out of every 10 wasps will emerge with a chunk of clay in their jaws. They always airlift it generally out to within a few yards of the nest and drop the pellets like small bombs from several feet high, then immediately return to repeat the process. In this way they make room for their nest to grow, and it takes a lot of mouthfuls of mud to do so!

“I suspect that if the folks who have this problem were to look closely within 50 feet or so of where the pellets appear they would likely discover a yellowjacket nest. Best time to look is late in the day or very early morning when the slanting sun’s rays reflect off the wasps wings. Standing still for several minutes and slowly surveying the field of view in front of you will often reveal a distinct traffic of shimmering wings coming and going to a spot in the ground. You’ve found the nest!

“Now, a few comments on other suggestions from readers that relate to wasps.

“As for the cicada killer wasps, you are correct that they excavate their nests in the soil and that the soil accumulates as a mound near the nest entrances. Like the dirt daubers, cicada killer wasps are solitary – that is each female makes her own nest with no help from any other wasps. (Yellowjackets are social and cooperate in construction [and defense!].

Cicada killers definitely could not be the source of the mud pellets found, as the female, when activly digging her burrow, pushes out the dirt and then immediately reenters her hole to dig some more. Flights furing nest excavation are quite uncommon and I am sure the females don’t ever carry dirt away.

“Mud or dirt dauber wasps do occasionally drop pellets of mud. However, these are usually relatively few and almost always fall immediately below where they are constructing their nest. They would not be littering the area with mud pellets which are time-consuming to collect and plaster to construct their nest fortress.

“Incidentally, mud daubers are one of my favorite wasps and I have spent many many hours observing their nesting habits. However, one thing I have never seen is to watch them capture and sting a spider, their prey. Nests contain dozens of paralyzed spiders at this season, yet their hunting behavior is very private somehow. So, if any of your readers regularly see wasps capturing
spiders I would be most interested in more details.”

Can you help? Email Bob here. 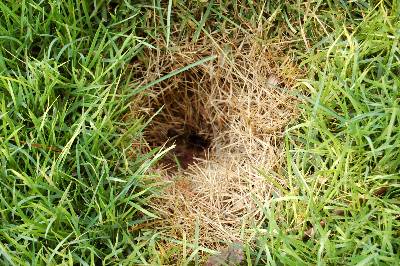 Guess where the dirt from this yellowjacket nest went? 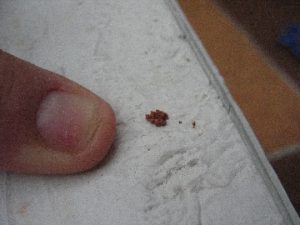