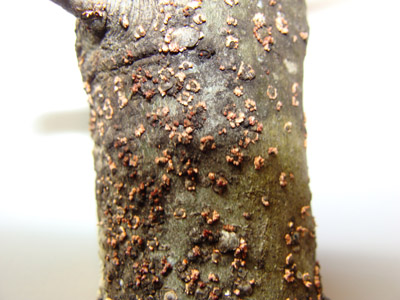 Sometimes I get to be in the audience when smart people really show their stuff. Recently Frank Hancock, the University of Georgia Extension agent in Henry County had a citizen visit his office with a perplexing problem on his pin oak.

There were many orange/pink masses covering several small limbs. They didn’t move, they didn’t seem to be alive….but what could explain this odd symptom?

Frank took several close-up pictures and sent them to me and other Extension colleagues, asking for our theories on what was going on.

Fortunately, his email went to Dr. Jean Williams-Woodward, a plant pathologist at the University of Georgia.

Jean immediately knew what it was! The pink/orange thingies are a fungus (Fusarium) that likes to attack scale insects in cool, damp weather. Looking more closely at Frank’s pictures, I could see the round scale on the tree bark….and the fusarium masses slowly consuming the scale.

Since fusarium has to have the precise temperature and humidity in order to kill scale, it’s not likely this would be a good control method for the scale insects that infest euonymus and holly and oak…..but it’s nice to know Nature does it’s best to control pests in ways we don’t initially suspect!