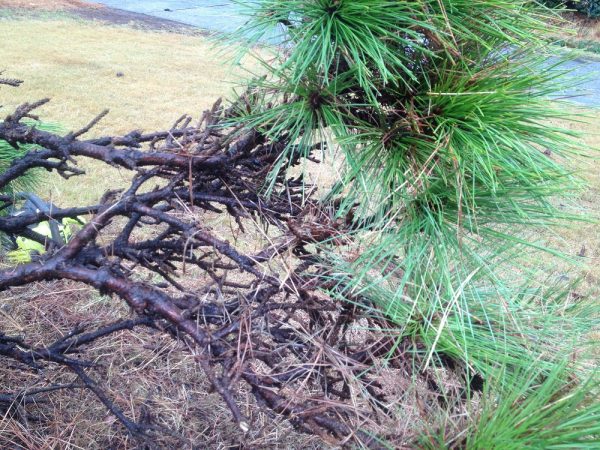 Q: Can you tell me why there is a flush of new growth in the top of this pine? Is there a problem?

It is caused by fusiform rust, a fungal disease that is very common on loblolly pines. The usual symptom of fusiform rust is swollen galls on stems and trunks but if the fungus invades a growing branch tip, it causes the cells there to send out vigorous, short shoots in all directions. The shoots are covered with needles, which explains why the foliage is so dense in the broom you have.

My neighbor has had one in his pine tree for twenty-two years – it was the first thing I noticed when I moved to my house. The broom has survived ice wind and snow with no problems – probably because the limb it’s on is so strong due to the huge amount of photosynthesis the broom produces.

However, after 22 years the weight of accumulated pine needles and a rainy, windy night caused the branch to fall.

A dwarf loblolly pine, Pinus taeda ‘Nana’, was developed from a broom that was propagated at a nursery somewhere.