The caller to my radio show a few Saturdays ago proffered a simple question: “What should I do with my Sammy Chips shrub? It has brown tips on the branches.”

Muttering to myself, I stammered, “Does this shrub have leaves or needles?”

“Oh, it has needles! They are the prettiest gray-green color you can imagine! They told me it was a new kind of Sammy Chips shrub at the nursery.”

Bingo! My caller had mis-heard the plant’s name at the garden center. Not a Sammy Chips shrub, her plant was a Chamaecyparis (pronounced “Kam-e-sip-a-ris”). It’s easy to understand how, in her hurry to purchase, the name could be mangled.

NOT THE FIRST TIME This wasn’t the first time a caller has stumped me with a plant name. Years ago I was asked about the culture of a Confederate rose. I confidently stated that it should be pruned in early spring, two months before it bloomed. I had not yet learned that Confederate rose is not a rose at all: it’s a hibiscus and it blooms in late fall. Rose of Sharon is also a hibiscus, while rose moss is actually Portulaca grandiflora. Moss roses, on the other hand, ARE roses and are close kin to the cabbage rose.

Deciphering the common name (as opposed to the scientific name) we attach to plants is enough to make your head pound!

HARRY LAUDER Speaking of odd plant names, I recently learned from a radio listener the history behind Harry Lauder’s Walking Stick, Corylus avellana ‘Contorta’. I have long admired the big shrub at Mr. Cason’s Vegetable Garden at Callaway Gardens. Sir Harry Lauder was a renowned Scottish singer and entertainer before and during World War I. His stage act consisted of caricatures of Scottish habits and heroes plus a medley of folk and patriotic songs. With his flamboyant personality, kilt and a peculiar curly walking stick, he entertained audiences across the world. “The Laird of the Music Hall” died in 1950 but his name lingers on in landscapes across the country.

MY SIGNATURE PLANTS I had occasion to visit Gene Griffith and Elizabeth Dean at Wilkerson Mill Gardens (www.hydrangea.com) a few months ago. Among their extensive collection of woody plants I found my own namesake – a Walter dogwood (Cornus walteri). Although little known in the horticulture trade, Dr. Michael Dirr describes it as “a meritorious plant, deserving of wider use” (of course!). I now have a small specimen happily growing in my landscape now, near a Reeves spirea (Spirea cantoniensis). I’m still looking for a Reeves skimmia (Skimmia reevesiana) or some Walter’s millet (Echinochloa walteri) for a second eponymous planting.

NAMES ARE IMPORTANT I’m often asked to recommend plants for specific situations. While I can sometimes give a few suggestions, most often, my list closes with this admonition: buy the ‘named’ variety of this plant! I’ve seen time and again the superior performance of plants which have been selected and named by a plant breeder or other horticulturist. The sweet clove scent of ‘Bath’s Pink’ dianthus recently perfumed the air at the University of Georgia Research and Education Garden in Griffin. Selected from her mother’s garden in the early Eighties by Jane Bath at Land Arts Nursery in Monroe (770-267-4500), it has gained a reputation for hardiness across the country.

Though scientific names are important when you seek a specific plant, the common name of a plant can help you find exceptional beauty and hardiness plus, perhaps, a short history lesson. And if you discover a chance seedling that deserves merit there is no rule in the world that prevents you from naming it ‘Bubber’s Best’ begonia or ‘Septic Tank Wonder’ weigela. 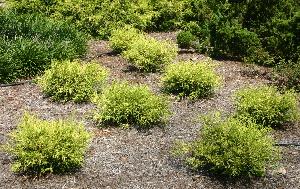