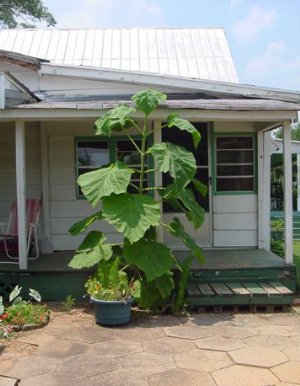 Q: I cut two ads out of the newspaper and wondered if you would give me some insight. One advertises the “Super-growing Flowering Shade Tree – Grows roof high in just one year!” It’s called a Royal Paulownia and I don’t know if this would be a good tree for Georgia.

A: By chance, I spoke to a caller on my radio show who had purchased a Royal Paulownia a few years ago. When she saw the ad, it was called a “Sapphire Dragon” tree and was described as having a bloom cluster six feet long!

She reported that it arrived as a stick, barely twenty-four inches long, but that it has shot up to fifteen feet tall since then. It did have big bloom clusters, as advertised. The tree known as Royal Paulownia, Paulownia tomentosa, is a common, weedy, roadside tree with big hairy leaves.

Because its limbs break easily, it isn’t recommended as a landscape tree. The “Sapphire Dragon” is claimed to be a different paulownia, Paulownia kawakamii, but I would only use it in a large landscape where you could enjoy the blooms from afar. The paulownia is sometimes promoted as a get-rich-quick, money-making timber tree. I think caution would be advised in this matter.