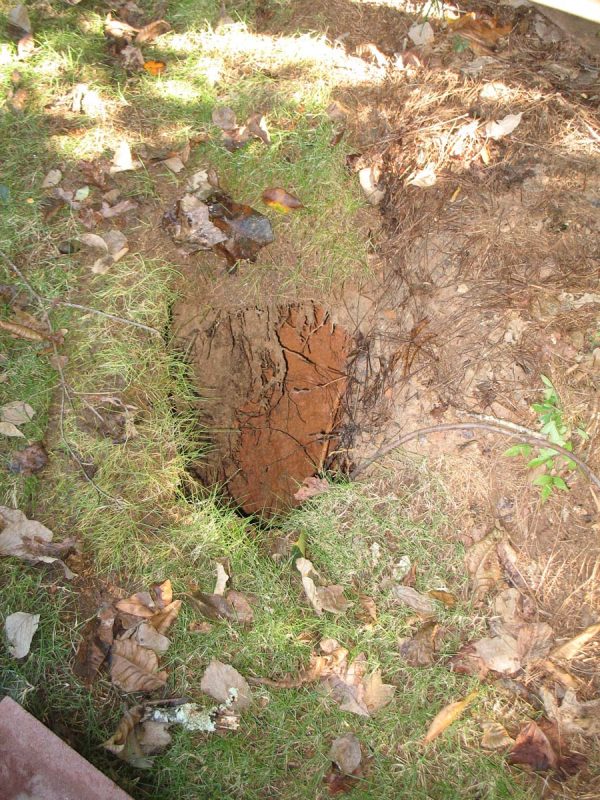 Sinkholes in the yard are an unfortunate but common problem that may arise five to ten years after a home is constructed. These holes, or underground cavities, form gradually but can appear in your lawn overnight.

In Florida, where some homes have been built on top of underground limestone caves, a sinkhole is a serious situation. In the northern half of Georgia, sinkholes like these are rarely seen. Atlanta perches above a thick layer of granite and clay.

Sinkholes typically develop where construction crews have buried debris, such as tree branches, stumps, and construction materials. After a few years this buried debris decays. This leaves behind a large underground cavity hidden by a relatively thin surface layer of soil and grass. The soil layer eventually caves in, causing a sunken area or hole that can seem bottomless.

If a sinkhole appears in your lawn, inspect it carefully to determine if the problem was caused by buried debris. Enlarge the surface opening so that you can inspect the entire cavity with a flashlight. If you can see traces of decayed trees or building materials, you have a construction sinkhole. By probing bottom and sides of the cavity with a long rod, you can confirm your suspicions. If you find solid earth on the bottom and sides, the cavity probably is man-made, and can be treated with one of the remedies listed below.

If you find a large pipe in the cavity, a leaky sewer pipe may have caused the sinkhole. Rainwater might have washed soil into the pipe. As the soil is taken away, more soil washes in and the ground above sinks. The best course of action is to consult the proper municipal authority before proceeding any further.

When the cavity is so large that you cannot reach the sides or the bottom or if you see lots of water or soft, mucky soil, you could have a more serious problem. A private geotechnical or soils consultant should be contacted to inspect the site and recommend a solution.

1. Check the location of buried utility lines before you dig. Call  811 for  free utility location service.

2. Enlarge the surface opening to access the entire cavity. Look for decaying debris and confirm the cause of the problem.

3. Remove any large pieces of undecayed debris. If the hole is large, this may require a professional landscaper.

5. Once the cavity is filled, establish grass or other plants on the bare soil. It’s probably not a good idea to plant a tree in this area for at least a couple of years. After that time, you can be relatively sure your problem is solved.