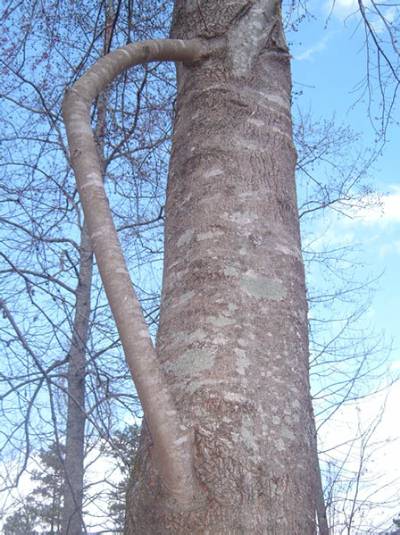 Q: Attached is a photo of a tree (maple, I believe) that is in the woods in my front yard in Buford, Georgia. Apparently, a branch grew out of the tree, then somehow reversed course and actually grew back into the trunk.

A: Now that is interesting!

I think your photos illustrate the phenomenon of limb grafting. I have a crapemyrtle on which two limbs crossed each other many years ago. Over the years, they grew so big that they rubbed a wound in both. The wounded spots finally grafted together, making a big “X” in the middle of the tree.

My guess is that somehow your limb was bent up and backwards when it was young. It came to rest against the trunk in the crotch of another limb. Over time, the “bent” limb was squeezed between the trunk and the normal limb….and it finally grafted itself into place.

It’s a neat thing to show your neighbors!