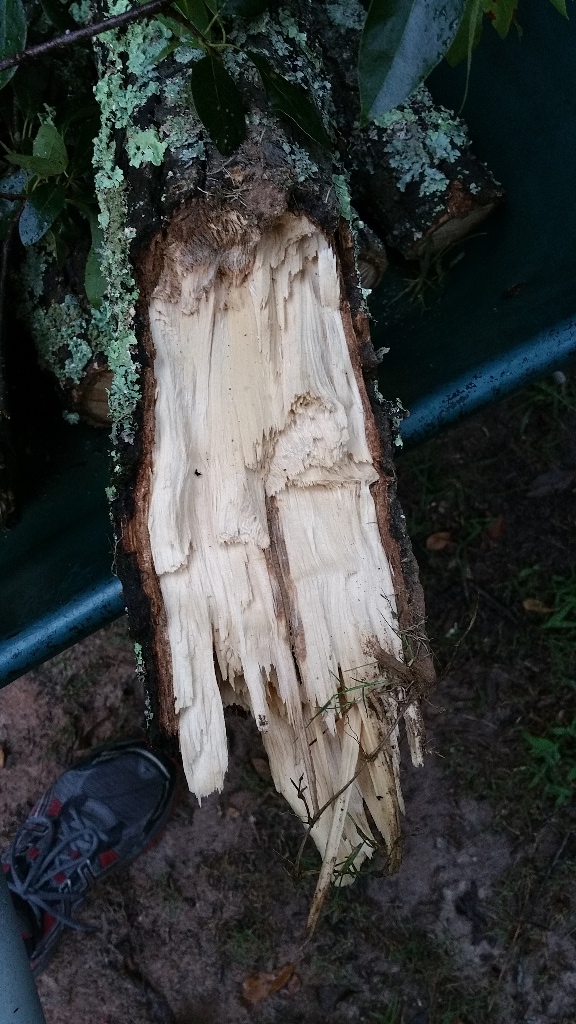 Q: I have a beautiful 65-75 feet tall tree in my yard. Over the last year, it has dropped 3 significant-sized branches. Big enough that I have to get the chainsaw out to be able to move them. These branches obviously could kill someone if they happen to be under the tree when this happens. What can I do to determine this tree’s health? I need to be able to work / enjoy my backyard with worrying about another limb falling.

This is a fairly common comment from clients, that a limb “broke and fell” during perfectly calm weather. In my experience the offending trees are usually sweet gums, tulip poplars and pecans, and the occasional water oak.

It is true that trees can abort limbs during drought stress. In my experience though, the sudden limb drop is just as likely in irrigated landscapes (perhaps more so)

In my view the phenomenon is more an issue of physics than of tree physiology. I’m not aware of a physiological mechanism in which a tree has the ability to allow a live limb to suddenly break; if a tree “wants” to abandon an unproductive limb it forms an abscission zone to cut off resources to the limb. Consequently, the leaves begin to fall off the limb, lowering it’s wind load capacity and initially lowering it’s risk of failure.

On the other hand, if we consider than most of these sudden limb drop cases involve trees in the landscape we can infer that portions of the tree receive more sun than they would in a forest, resulting in longer branches and more dense canopy concentrated at the outer extremities of the limbs. From a physics standpoint his growth pattern can create a longer lever than the trees physiology is adapted to (especially evident in soft wooded species). Many of the abrupt breaks happen some distance out from the branch collar, which is consistent with the location of the maximum load on a lever.

My guess is that the limb that “suddenly drops” in calm weather was likely damaged in a previous storm or by wind earlier in the day and simply took a few hours or days before it finally let go and fell.

I don’t think this type of limb drop can be prevented, but it’s possible that pruning to reduce limb length or thin the density of the canopy could reduce the risk.

Besides Bartlett Tree Experts you can find certified arborists at The Georgia Arborist Association.