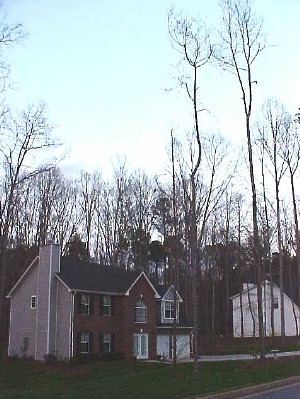 Q: I have a question about the sweetgum trees in my front yard. Three of them are very tall and quite ‘spindly’. I’d like to keep the trees, but I’d like for them to provide more shade. I’m considering having the trees topped; however, one tree service has told me that it would be better to simply replace them instead of topping them. Can I expect that my trees will look more substantial in several years if I top them now?

A: From the looks of your photograph, your home was recently built and several trees were taken down during the building process. I know this because the trees you have left are ‘spindly’, as you say. They have branches and foliage just at the top of a tall trunk. This was caused by the trees originally growing among many other trees. This environment forced them to rapidly grow tall, without branches close to the ground.

Topping them would be a TERRIBLE idea. The trees would only branch out near the topping cut, not down lower. You’d have the same look as now in a couple of years but the new growth following the topping cut would be weak and very prone to breaking out of the tree.

In addition, you have little idea how much compaction, caused by construction equipment, was done around the roots of the existing trees. Just a few trips over a tree root zone leads to a slow death, from which the tree never recovers.

And I haven’t even mentioned the complaints you’ll have regarding the sweetgum balls in your lawn!

I’m on the side of the tree service. Ultimately you’ll be better off to remove the skinny sweetgums and replace them with maples or oaks mixed with a few dogwood, redbud or serviceberry trees.