I believe I am finally rid of the infernal archangel.

Several years ago I found a plant that seemed to be just the ticket for my shady back yard. It had silvery green foliage and yellow flowers in the spring. Best of all, it was described as a spreading plant that tolerated heavy shade with aplomb! “No more boring English ivy for me”, I decided. Yellow archangel (Lamiastrum galeobdolon) would be a wonderful and distinctive plant in my landscape. I planted several 4 inch pots of the stuff. Under azaleas, near my ferns and hosta, wherever I wanted a silver contrast to green foliage, yellow archangel was planted.

A couple of years later, I was losing small ferns which had been overwhelmed with the vine. An azalea situated near an especially vigorous clump of archangel was tangled with silvery green leaves. I found archangel sprouts under hydrangeas fifteen feet from the nearest clump that I had originally planted. I decided that the archangel was a bit too similar to kudzu for my taste. A tank of weedkiller was employed on my first attempt to wipe out this noxious weed.

I sprayed every spring for three years. I pulled clumps from the ground where they had spread far and wide from the mother plant and stuffed them in plastic bags. I resprayed in September when I found survivors from the annual spring onslaught.

Now the yellow archangel is gone, I believe, at last. And good riddance to a weed that, when I see it offered at a nursery, I want to jerk from its pot and grind into the concrete with my heel! 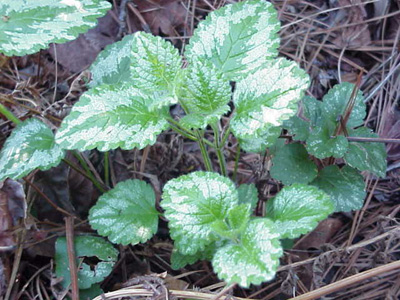