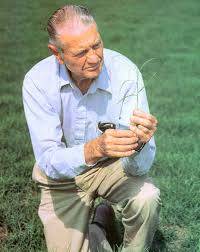 Glenn W. Burton, 95, a Nebraska farm boy who became a world-famous agronomist died Nov. 22, it was reported in Tifton, Ga..

Dr. Burton was born in Clatonia, Neb., and raised on a farm in Bartley, Neb. He was a 1932 agronomy graduate of the University of Nebraska. In 1936, he received a doctorate in agronomy from Rutgers University.

After graduation, he worked at the University of Georgia’s Coastal Plain Experiment Station in Tifton, first as a scientist with the Department of Agriculture’s Agricultural Research Service and then as a university professor.

When Dr. Burton arrived in south Georgia, he found there were few nutritious grasses for cattle, so he went to work developing hybrid Bermuda grasses. His first hybrid, known as coastal Bermuda, doubled forage production in the South and at one time covered 10 million acres of Southern pastures.

Burton’s best-known contribution to the Green Revolution began in the 1950s, when Burton became interested in a food grain called pearl millet — little-known here but hugely important in India’s drier regions, where millions depended on it for food.

In the early 1960s, Burton gave a scientist from the Rockefeller Foundation a packet of pearl millet seeds he had developed. The scientist took the seeds to India, where he distributed them among growers participating in a research program to develop more productive strains of the grain.

Soon, the Rockefeller scientist heard back from one of the growers: a hybrid strain using Burton’s seeds had nearly doubled his per-acre productivity. India’s pearl millet production jumped from 3.5 million tons in 1965 to 8 million tons in 1970.

The story of Bermudagrass

Before the early 1950s, many Southern golfers had to putt on greens covered with green-colored sand. The fairways were nothing but centipedegrass and seeded bermudagrass, which was very rough and turned brown in winter. Dr. Burton’s introduction of Tiffine, his first ultra-short hybrid turf grass, gave Southern golfers real putting greens.

The career of Glenn Burton took a real turn in 1946 when Dr. Fred Grau, Director, of the U.S. Golf Association Green Section (also a student of Keim), and Dr. O. S. Armodt, Glenn’s USDA boss, paid Burton a visit in Tifton, Georgia. Grau and Armodt had just completed a survey of turf in the South and the survey indicated there were many problems and very little research to solve them. They asked Burton, if Grau could provide $500.00 a year for turf research would he be willing to start some research studies.

He of course replied “yes,” and “breeding of better turfgrasses” was added to his job description.

Since common bermudagrass, Cynodon dactylon, is a highly variable species, the seed gives rise to many different plants. Many seeded bermudagrasses from old golf greens were collected and evaluated. During this same period a variety named U-3 was selected from the bermudagrass plots at the Arlington Turf Gardens in Arlington, Virginia.
The Breeding of the First Hybrid Bermudagrass

During the fall of 1946, a number of the top golf courses in the south were asked to send Dr. Burton a bermudagrass plug from the best part of their best putting green.

After three years of evaluation and testing, the common bermudagrass grown from seed was one of the poorest in the test. The best entry was Tifton 57, an F1 hybrid resulting from a cross between a very dense dwarf and a disease resistant selection from Burton’s pasture breeding program. This Tifton 57 hybrid was bred in 1942 and officially released in 1952 as Tiflawn bermudagrass.

Tiflawn bermudagrass, like common bermudagrass, is a tetraploid with 36 chromosomes. Tests revealed that Tiflawn was too coarse and vigorous for golf greens. It was however, the best tetraploid bermudagrass for turf and was highly recommended for use on football fields, playgrounds and other rough use areas.

Once the first controlled hybrid (Tiflawn) was released in 1952, Dr. Burton felt it would make an excellent parent to produce a better hybrid for golf courses. So he crossed a small fine-leafed, 18 chromosome Cynodon transvaalensis (African bermudagrass) with the coarser and more vigorous parent – Tiflawn.

From this hybrid cross came a hybrid known as Tifton 127, later named Tiffine. It was a sterile hybrid with 27 chromosomes and since the seed was not viable TifFine had to be planted vegetatively. However, before the Tiffine could gain impetus and popularity on golf courses, Dr. Burton replaced the Tiffine with one of his other selections he called Tifton 328, known today as Tifgreen (Cynodon dactylon x C. transvaalensis). Dedicated plant breeders are never satisfied with their creations and therefore, continually search for better and superior plants that are better adapted to the environment and to the particular use intended for the plant.

Tifgreen was released in 1956 and is a low-growing, rapidly spreading, disease resistant hybrid which can make a dense, weed-free turf when properly managed. Its fine-textured, soft, forest green leaves and very few seedheads are the reason it has been a successful grass for golf and lawn bowling greens in many areas. Further, it tolerates a mowing height of 1/4 inch and tolerates overseeding with cool season grasses very well

The search for a better, more durable grass for football and soccer fields and golf tees and fairways continued and the fourth product of Burton’s turf breeding project resulted in the release of Tifway in 1960. Tifway, after three years of testing as 419, is another 27-chromosome Cynodon transvaalensis x C. dactylon hybrid. According to many sources, Tifway is darker green, requires less nitrogen, greens up sooner in the spring, makes a weed-free sod and is more tolerant of traffic than many of the earlier releases. Many sports turf managers continue to prefer Tifway for their sports fields because of its wear tolerance and aggressive growth characteristics.

Tifdwarf is another of the fine grasses researched and developed by Burton which was released from Tifton in 1965. Evidence suggests that Tifdwarf is a vegetative mutant that occurred in Tifgreen at Tifton before the first planting stock was sent out for early testing. This is a dwarf type with shorter leaves, stems, and internodes. It also has a dark green color, high shoot density and a low, slow growth habit. It tolerates a mowing height of 3/16 inch, and requires less fertilizer for comparable color than Tifgreen.

During the winter of 1970 Dr. Burton, with the assistance of Dr. Jerrel Powell, initiated research designed to create mutants in their best triploids, namely, Tifgreen, Tifway and Tifdwarf.

Dormant sprigs (stolons and rhizomes) were washed to remove the soil and then were cut into small pieces and treated with various dosages of gamma rays from a cobalt 60 source. The dormant sprigs were exposed to 7,000 to 9,000 r of gamma rays and produced mutants. From a total of 158 mutants created in this manner and evaluated in the field, one looked promising, a mutant of Tifway and this one was officially released in April of 1981 for further testing and evaluation as Tifway II. Tifway II appeared to be similar to Tifway but possessed increased shoot density and could be used in moderate maintenance situations.

One was released for the sports turf profession, TifSport (1997) and the other for the golf course industry, TifEagle (1997).