When most people think of bananas hanging on a tree, they picture tropical places. A University of Georgia researcher wants them to start associating Georgia with the popular fruit, and he’s found a new variety to help do that.

Americans love bananas. They eat 33 pounds per person every year, consuming 31 percent of the world’s bananas. Some 99 percent of all bananas eaten in the U.S. come from another country, said Greg Fonsah, an economist with the UGA College of Agricultural and Environmental Sciences and head of the UGA banana project.

“It will be our new commodity, and at least part of that $1.5 billion spent to import bananas to the United States would be going back to boost our economy,” said Fonsah, who worked with multinational companies such as Del Monte Fresh Produce and Aloha Farms Inc. in Hawaii with bananas before coming to Georgia.

Fonsah and his colleagues have investigated 35 banana varieties in Georgia since 2003. One variety called Veinte Cohl – discovered in Florida — looks promising, he said.

Veinte Cohol is a short-cycle banana that grows well in Georgia and the Southeast. Its pups, or small shoots from the tree, can be planted in April. Its fruit is ready to harvest in October before plant-killing frost hits the southern part of the state. Like all bananas, the green top doesn’t tolerate freezing temperatures.

Fonsah said Veinte Cohol can grow anywhere in the U.S. Department of Agriculture plant hardiness zone 8A as an ornamental landscape or nursery plant in addition to fruit production.

Typically, bananas need to mature on the tree for three months before harvest. Veinte Cohol’s bananas need just four to six weeks before they are ready to be plucked.

There are hundreds of varieties of bananas, but Americans typically prefer the Cavendish variety. When compared to Cavendish, Veinte Cohol bananas are smaller and a little tangier with a slight citrus taste.

Veinte Cohol bananas appeal to an ethnic market and sell for as much as $1.99 per pound. Americans typically pay between 45 cents and 65 cents per pound for Cavendish, Fonsah said.

“If we are satisfied to import all of our bananas, the money will go oversees. We may not be able to produce enough to compete oversees, but we can cut into that profit and keep part of our money over here,” Fonsah said. “We can also invest in other parts of our economy by purchasing fertilizer, equipment for farming and creating jobs.”

“(Veinte Cohol) is perfect for small growers,” Fonsah said. “It is great to grow for fun, part-time, for agritourism and for additional supplemental income. Kids just freak out when they see these bananas growing.”

(April R. Sorrow is a news editor with the University of Georgia College of Agricultural and Environmental Sciences.) 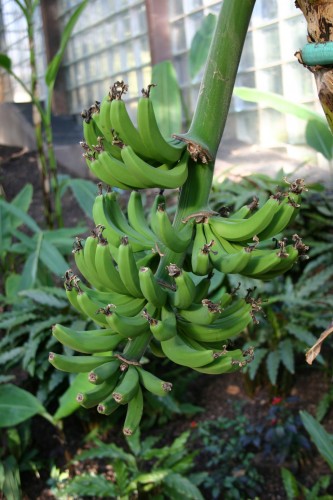