Q: We have a peach tree that was covered in beautiful blooms. However, when the peaches ripen Japanese beetles cover each peach. I don’t like using insecticides but what can I do?

A: This is why peaches are so hard to grow in Georgia: the fruit is loved by fungi, bacteria, insects and animals just as much as we love it.

I don’t have a good organic solution for you. Synthetic insecticides like carbaryl (Sevin) or bifenthrin (Ortho Bug-B-Gon MAX) kill beetles readily. You could try spraying the fruit with neem oil (Neem) as an anti-feedant or kaolin clay (Surround) as a chewing deterrent. Since Japanese beetle females lay their eggs in grassy spots, eliminating lawn grass nearby may help.
————————————-
Bill M. responds: “Aren’t there more organic alternatives?

“Jeff Poppen. the Barefoot Farmer, “knocks the beetles into a paper bag and drowns them it the pond” — sounds easy enough on 1 or 2 trees.

“The Organic Gardner’s Handbook of Natural Insect and Disease Control suggests: ” In the early morning, shake beetles from plants onto dropcloths, then drown them in soapy water…. apply milky disease spores or parasitic nematodes to sod to kill larvae; attract native species of parasitic wasps and flies”. “
———————————-
My reply:

I’m not sure these guys have ever attempted Japanese beetle control in Georgia conditions. If you get to the trees at daybreak, while the beetles are chilly, they won’t fly from the fruit and can be knocked into bags or dropcloths. However, I’m not sure many gardeners have the gumption to get up that early. If they wait until after breakfast, the insects will be warm enough to fly away at the slightest disturbance.

Both milky spore disease and parasitic nematodes are effective only if every turf area within 100 yards is treated. Otherwise the beetles simply fly from untreated spots to the peach trees. Treatment by either means is is VERY expensive and would take several years to accomplish much control.

Since the questioner describes beetles in big numbers covering the fruit, I suspect she lives near pastures, where beetle population control is impossible.

One solution some might suggest is placing beetle trap bags at the corners of the property to attract beetle away from the trees. Research has shown that more beetles are attracted to a beetle trap area than are actually caught in the bags, so this would not give relief.

I know it’s a wonderful thing to eat fresh peaches off a backyard tree, but I’d rather go to an organic farmers market and buy them from someone who needs the income rather than trying to control Japanese beetles in a suburban environment. 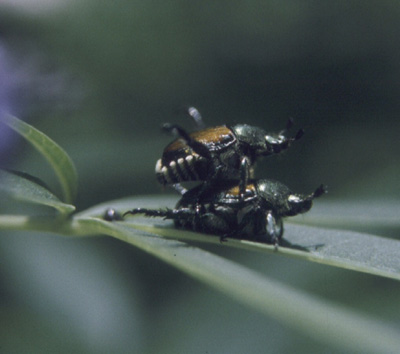