A couple of weeks ago, I posted a description of a kingsnake eating another one.

Now I’ve been sent something even more fascinating: a kingsnake killing a copperhead!

The way the story unfolded was: I live on Lake Varner in Covington on a VERY wooded lot. I was in the backyard pruning some Knockout roses when my young dog was just behind me barking up a storm. If you have ever owned a dog you understand the meaning of certain barks. This bark told me some critter was there and not likely a critter of the rodent variety (he would have just chased that kind and been done with it).

I turned to see what it was—a King Snake. All that was visible was the back half; the front half was under a thick floor of leaves. The snake stopped to shake its tail, hoping to fend off my dog. I made the dog leave, telling him the snake was going to help me with the chipmunk problem. I turned around to finish what I had started. Mind you, all this was just a few feet from where I stood.

Within seconds of my return to my task, I heard all this commotion and thought the snake had ferreted out a chipmunk. I turned to see a snake fight instead. Within a matter of 2-3 seconds, the King snake had coiled itself around the Copperhead. The Copperhead was thrashing around violently, biting the King Snake with every head thrust, left-right-left-right, slam, slam, slam.

I rushed to get my camera which probably took me about 60 seconds. Fortunately, the thrashing was still in progress. I got literally within 12-18” of the activity. (People thought I was totally nuts, but they don’t understand that neither creature gave a rat’s patootie about me!) After about 15 minutes, the thrashing slowed. Left one thousand, right one thousand, left ooonnnne thousand, right ooonnneee thousand. The King snake released his own jaws from the lower part of the Copperhead and slightly coiled his upper parts. During one of the left-right slow motion thrashes, the King Snake snapped forward, grabbing the Copperhead’s head in his own mouth. After about 3 minutes, the swallowing began.

This process was so slow, I got bored and returned to my chores. I checked by every 30 or so minutes but it was still dragging on. I have no idea how long it ultimately took for the consumption but the next morning, the King Snake was sunning himself (or herself?) on our back patio. When s/he saw/felt/heard me, s/he slithered away. I hated to see the snake leave since we have too many snakes around our yard—that snake still had work to do as far as I was concerned.

Timing is everything…had I stepped away even for a minute where I wouldn’t have heard that few seconds of commotion, I would not have known the fight was even going on…even if I had returned to my backyard chores. They blended in so well to the environment and the fight was virtually silent immediately after the constriction. (Scary thing—if that King Snake hadn’t been there, it is HIGHLY LIKELY that I would have stepped on that Copperhead while wearing my flip flops as it was literally inches from where I was pruning!) 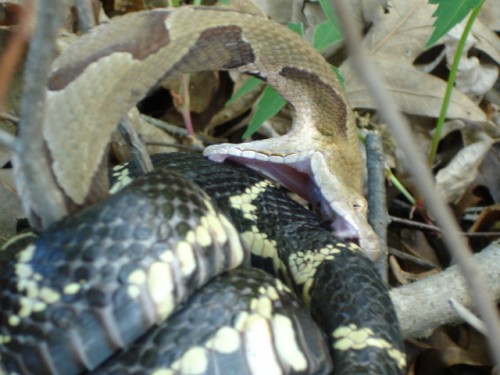 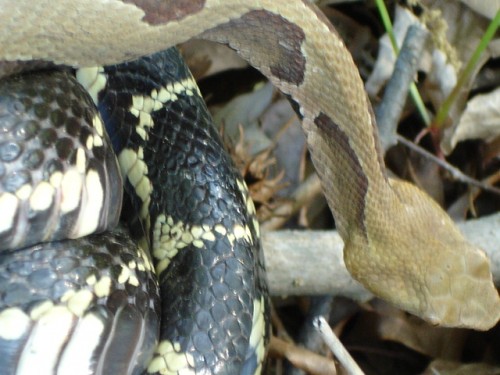 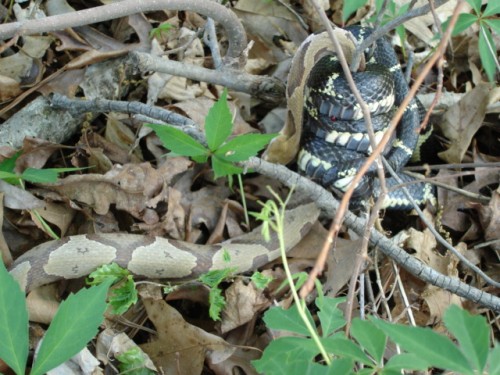 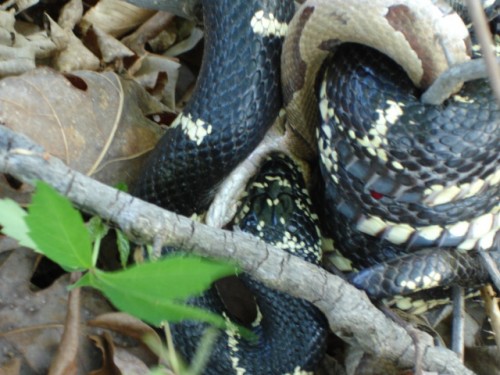 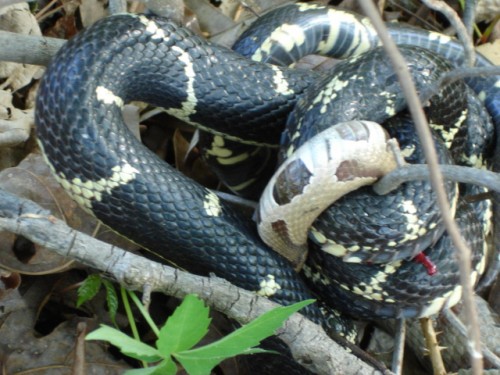 Tags For This Article: copperhead, kingsnake