As spring approaches, the first yellow blooms on forsythia plants remind some gardeners that they have once again put off pruning until the last minute. Plants are pruned for different reasons. Shrub roses need pruning annually, to make the new growth that makes big blossoms. Sprouts around the base of cherry, pear and apple trees should be removed so they do not compete with the growth of the main plant. A drooping limb that you must duck under when mowing should be taken away just for convenience’ sake.

In general, shrubs that bloom between February and June should be pruned after they have finished blooming. All trees should be pruned now, when they are dormant and you are better able to see their structure. Ornamental grasses should have all of their foliage cut away to allow new growth to come through. Fruit trees are pruned to maximize their leaf area.

Mid-February through early March is a great time to prune shrubs and get them ready for the next growing season. Coming out of winter dormancy, shrubs are stimulated by the warm weather to grow rapidly. If you shorten branches now, the stubs will quickly be covered by new growth.

MAJOR REJUVENATION Old azaleas, ligustrum and Chinese hollies may have a severe case of “bare legs.” As they grew larger, the foliage above shaded out the limbs below, causing them to die and drop off. If that is your situation, the best procedure is simply to remove everything down to 12 inches from the ground and allow the shrub to start over. This may seem like a drastic move, but a shrub with a mature root system can easily recover. Within weeks, green buds will emerge from the stump. When they have grown 6 inches, clip out the tip of each one, causing it to resprout. This will form a strong, rounded structure for your shrub. By late summer, the stump will be covered with foliage and you’ll have a shrub more in proportion to your landscape.

NIPPING AND TIPPING Maybe your shrubs don’t need drastic pruning — they just have a few unruly branches that need to be removed. Use your hand pruners to cut out the branches, but make the cuts at the correct spot. Try always to cut just beyond an existing bud or small branch. The shrub will have an easy time repairing the cut spot, and a stub will not be left to invite disease. If an entire branch must be taken off, make your cut back where the branch originates from a larger limb. If lower branches are thinly covered with leaves but still receive lots of sunshine, pinch out the tips of the fast-growing twigs. More leaves will sprout, giving a fuller appearance.

AVOID HEDGE TRIMMERS Electric and gas-powered hedge trimmers may be convenient, but they are rarely a good idea for pruning landscape shrubbery. True, you can easily make “green meatballs” with a power trimmer, but you’ll end up with an eggshell of greenery covering an interior of brownery. If light can’t penetrate inside your plant, no leaves will grow there. Insects find a protected home, and any damage to the plant will leave a gaping brown hole. Rest your arms and wrists frequently, but use hand tools as much as possible. 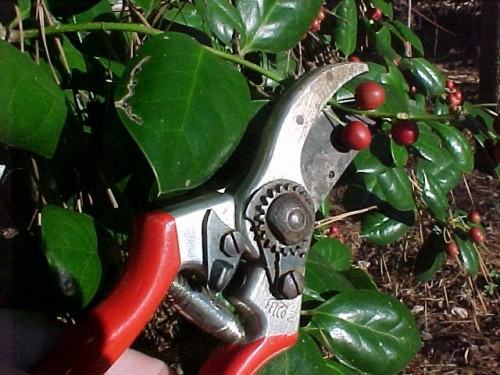 Tags For This Article: pruning, shrubs